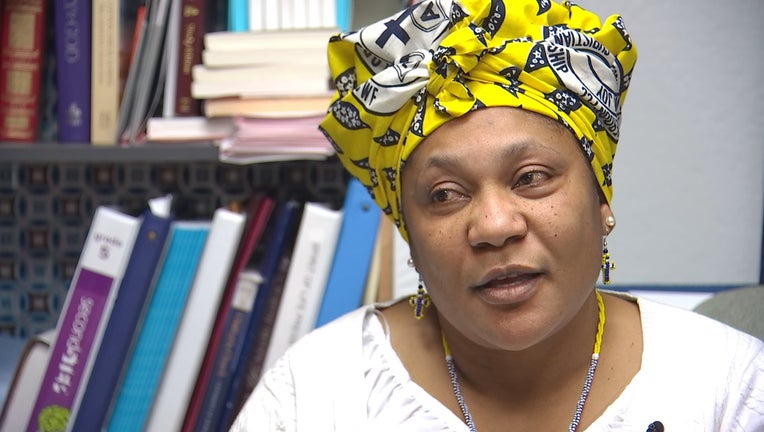 Gladys Mbonifor is facing deportation back to Cameroon but her church is supporting her in her fight to stay.

APPLE VALLEY, Minn. (FOX 9) - An Apple Valley church is coming together to support one of its deacons who's facing deportation.

Her home country of Cameroon is currently in the midst of a violent civil war. In fact, the State Department raised the alert level in some parts of the country to a “4” which means it's way too violent to travel there due to terrorist attacks and other crimes.

She fled to the United States eight years ago to escape everything going on in her village and now she fears for her life if she's forced to go back.

Sunday, Gladys Mbonifor led the choir at Spirit of Life Presbyterian Church in Apple Valley. Singing is her passion and what gets her through the tough times. Right now, she's preparing to face what she says is a life or death decision.

"My life is at stake if I go back home," she said.

Gladys is facing possible deportation back to Cameroon, a country fully engulfed in a civil war that's already displaced her parents and brother. She came to the United States in 2011, first to New Mexico then to Minnesota in 2015.

"I was fleeing from domestic violence so I came here then filed for asylum," she explained.

Gladys was working with an immigration customs enforcement officer to re-open her asylum case. While waiting for a judge to see her, she was allowed to live in Minnesota as long as she was compliant and scheduled check-ins. But all of that changed earlier this year when she was assigned a new ICE officer.

This person looked at her record and saw that she had overstayed her temporary visitor status by several years and had not filed for a renewal. Gladys was denied a request for a stay of removal last month.

"I don’t pose any threat in the community, everybody that I see everybody loves me and my home is here," said Gladys.

"That there is a moral law in play here and we’re not going to stop," said Pastor Rob Smith of Spirit of Life Presbyterian Church.

The congregation are doing whatever they can to keep Gladys. The mother of one works three jobs as a nursing assistant to help pay for her daughter's college education.