From tragedy to inspiration, a Minnesota boy who lost his leg in a boating accident isn't stopping the youngster from being a winner in rowing.

(FOX 9) - From tragedy to inspiration, a Minnesota boy who lost his leg in a boating accident two years ago is now starting to make waves as a rower.

It was about two years ago when FOX 9 shared the story of then-10-year-old A.J. Oparah who lost his leg in an accident.

The terrible injury hasn't slowed down the now-12-years-old A.J. When we met up with him Thursday, he was flying across the water. Strong and fast, each stroke bringing A.J. closer to the finish line.

For A.J., each day is a race of sorts, working to be great and grab hold of everything life has to offer. But just being on the water is a big accomplishment for him.

"I’m just happy that I can force myself and being on the water and just having fun and not thinking about what happened two years ago," he said.

Now, life is about what A.J. can do, not what he can’t. As of late, rowing tops the list, taking it on like it’s just any other challenge, with the competitive spirit to go with it.

Rowing gave him an outlet that neither A.J. nor his mom ever expected, being back in a boat and using it to become more powerful and determined than ever before. 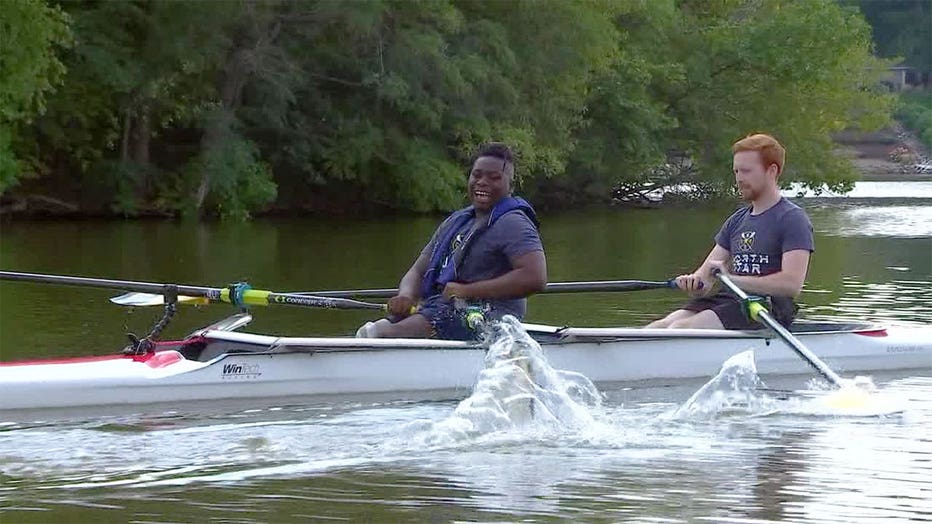 A.J. Oparah (left) is a burgeoning star after losing his leg two years ago at the age of 10. (FOX 9)

North Star Community Rowing was started in 2016 to make the sport more accessible and this summer A.J. was added to the team.

Although he's not even a teenager yet, Coach Anne believes he's almost ready for a regatta.

"We really would love to see him rowing at the head of the Charles in this inclusive event," said Anne Jasper Hinrichs with North Star. "That’s the biggest regatta in the country in Boston and possibly he’ll be doing that in Boston next year with us."

But a big race or just another day taking on the world, it’s clear A.J. is ready to take on anything.

"You just need to keep pushing, keep moving forward, put in your best effort, and just do it, have fun," he says.

With each smile, with each stroke, A.J. shows everyone he’s only just beginning his battle to be the best. A new body, a new life, a new race that’s just getting underway.