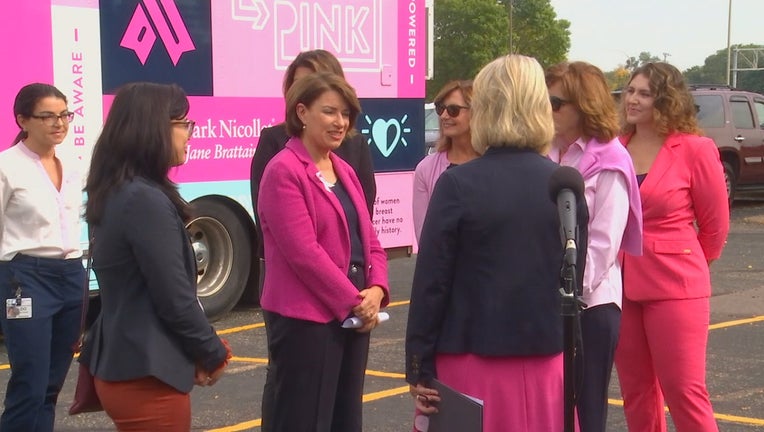 Sen. Klobuchar speaks outside the Mammo-A-Go-Go which was doing examines in Brooklyn Center on Friday. (FOX 9)

After breast cancer treatment, Sen. Klobuchar urges women not to put off mammograms

With the pandemic, Klobuchar points out too many people are still putting off these and other health screenings – just like she did, prior to her own breast cancer diagnosis.

The mobile units park all over the Twin Cities nearly every day of the week. Yet with the pandemic, Klobuchar points out too many people are still putting off these and other health screenings – just like she did, prior to her own breast cancer diagnosis.

"We know that one out of three Americans has put off some sort of exam, not just mammograms, any type of early exam," says Klobuchar. "They need to schedule their appointments."

Those driving the Mammo-A Go-Go efforts are focused on making mammograms more readily available in underserved communities and encouraging women to get screened for breast cancer wherever is convenient for them.

"Unfortunately we know there are health care disparities within our care systems across the country.. with women of color getting recommended screenings at significantly lower rates than white women," says Laura Loberg, the Methodist Hospital vice president of Surgical Services. "Our Mammo-A-Go-Go are just one of the ways we are working to eliminate that gap."

While breast cancer remains the most commonly diagnosed and leading cause of cancer-related death for women in the United States, the five-year survival rate at stage zero and stage one is 100 percent, and 93 percent at stage two. Statistics that multiple survivors in Brooklyn Center Friday know firsthand.

"As long as you find out you’ve got it, you are in a lot better shape," says Klobuchar.