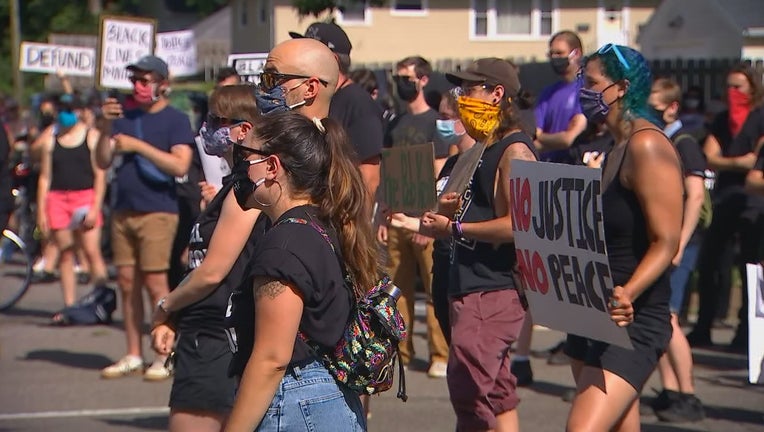 MINNEAPOLIS (FOX 9) - Once again, hundreds of people gathered outside the Minneapolis police federation building on Thursday, calling for union boss Bob Kroll to step down.

Earlier this week, speaking for the first time since George Floyd's death sparked calls for change including his removal, Kroll said he's not going anywhere.

Protesters call for Minneapolis police union president to step down

Protesters gathered outside of the Minneapolis Police Federation to calling for the union president to step down.

"So we say oh hell no we refuse to back up we refuse to back down," said civil rights attorney Nekima Levy Armstrong. "We call on Jacob Frey to come out of the hole he climbed into and he needs to fire Bob Kroll."

This week, the union boss surfaced in multiple national and local television interviews to speak about the death of George Floyd. He had been silent on Floyd's death for weeks.
In an interview with FOX 9's Tom Lyden, he says he is still able to represent the union.

"I feel not just myself, but the board and our federation has had the blame shifted to us by the political leadership in the city and the state that we’ve been made, become the scapegoat for their lack of decision-making ability and the lack of to keep people and property safe," he explained.

In five years as union president, Kroll has proven to be a divisive figure, from his appearance at a President Donald Trump campaign rally to calling Black Lives Matter a terrorist organization.

In a letter to his fellow union members, Kroll wrote, "What is not being told is the violent criminal history of George Floyd."

He said he now regrets that letter but hundreds of community members don't and they say they want accountability.

"A lot of these officers have pasts, and if we don't stand up, we're continuing to enable them to keep killing us and pursuing higher positions in leadership," said Sumaya Aden, who lost her brother in an officer-involved incident.

The group promises they will not stop protesting outside of the federation building until he steps down.