Highs in the 40s today a few inches of snow possible tomorrow.

(FOX 9) - After a gloriously mild Thanksgiving weekend, we're rounding out the month on a snowy note for at least some of us. This will NOT be snowmageddon or a snowpocalypse, but will likely affect BOTH commutes on Tuesday leading to a pretty rough day of travel. Not to mention, our snow blowers may get some use for the first time this season. 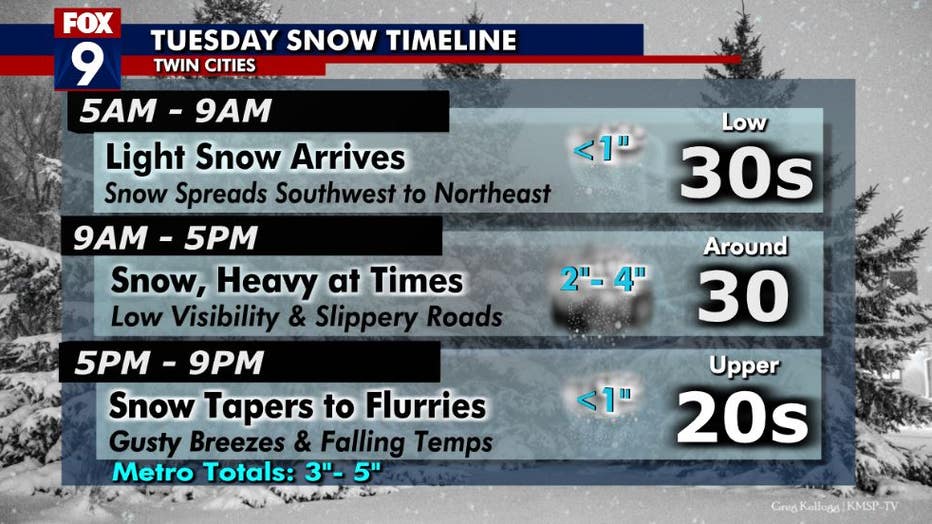 This will NOT be snowmageddon or a snowpocalypse, but will likely affect BOTH commutes on Tuesday leading to a pretty rough day of travel.  (FOX 9)

Much like any other storm during the cold season, there are some nuances that can't always be foreseen that could lead to some "wiggle" in our accumulation versus the forecast. Current forecast shows a swath of gradually building totals from southwest Minnesota to northern Wisconsin. It will likely start with plenty of twos and threes near the Iowa border, building to some fours and maybe some fives toward the Twin Cities, before adding up to sixes and sevens closer to Lake Superior. Check out what that may look like... 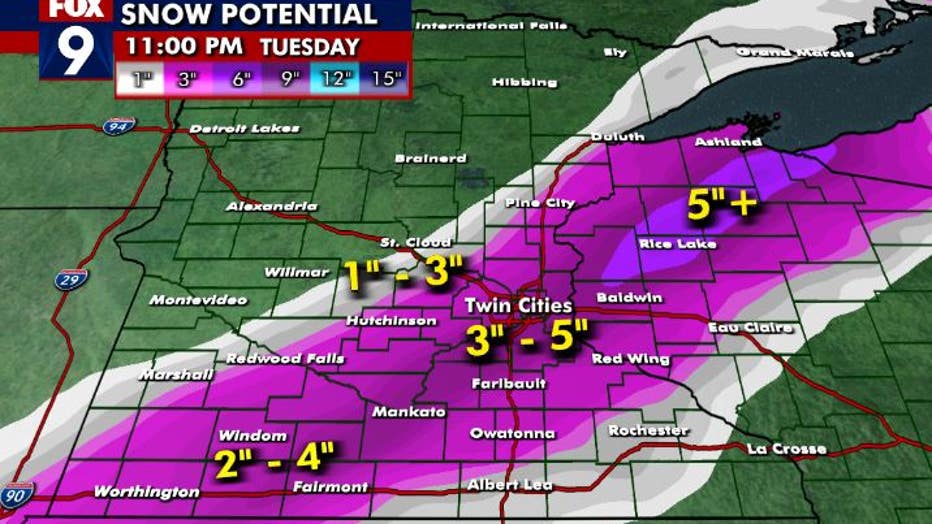 These "wiggles" in the overall snow totals can make a big difference from neighborhood to neighborhood, but in the grand scheme of said storm, are really quite tiny. This is a big reason why we can't always resolve exactly how things will unfold. So, the following 3 images show lift in the atmosphere by using a color table. Areas with any sort of color to them are likely to at least have some cloud cover, with areas of more vibrant colors like yellows, oranges, and reds will often mean some type of precipitation. 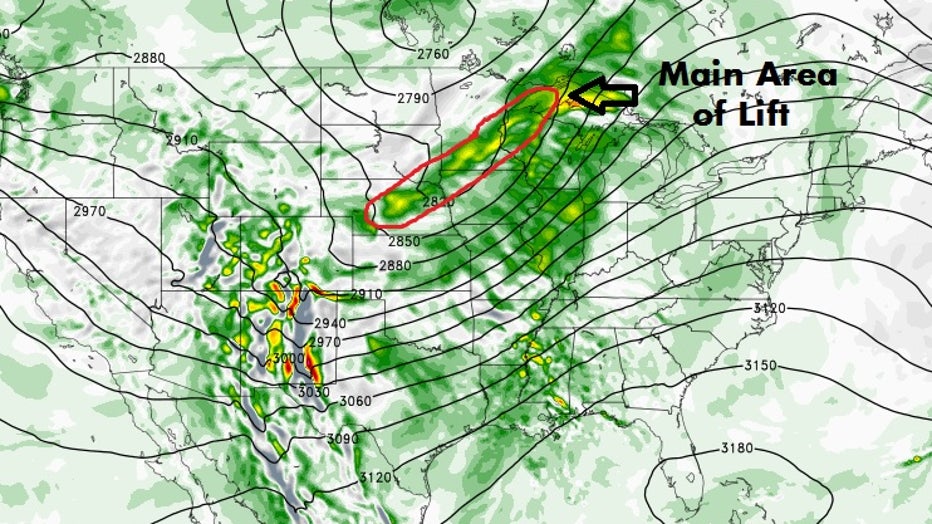 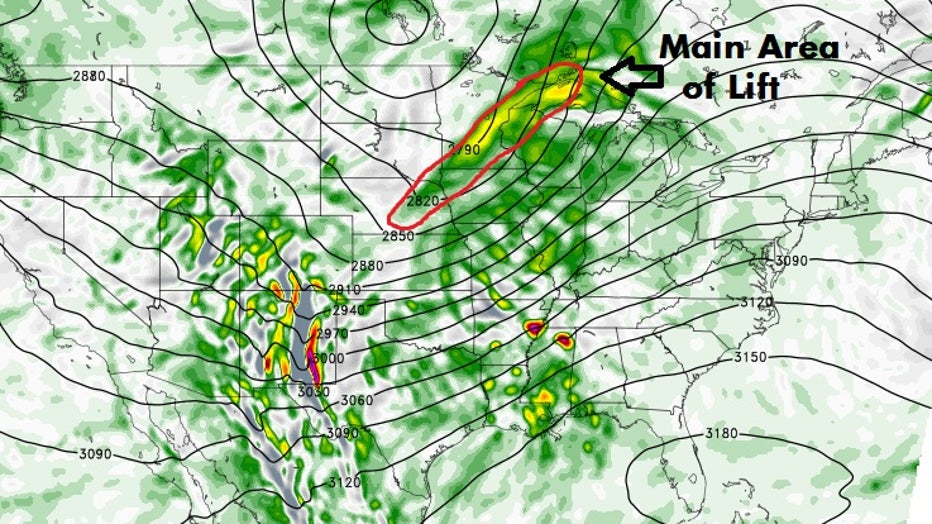 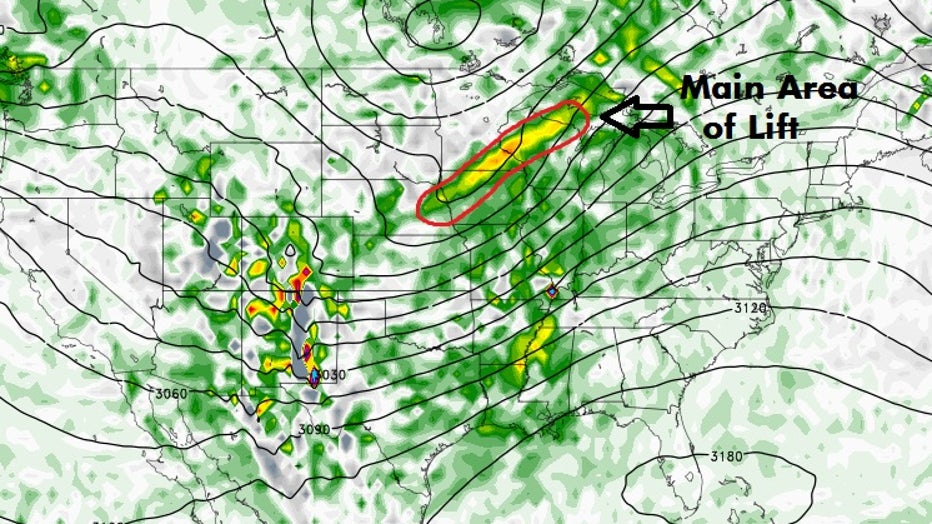 If you look at the overall picture on all three of these computer models, they look very similar. The depiction of the atmosphere on a more global scale has become quite accurate over the last couple of decades. That's one of the reasons why we can often "see" large scale warmups or cool downs coming 10+ days in advance. But the more nuanced aspects of the large scale pattern can still be quite allusive and can lead to big changes in the forecast in more local areas, especially when it comes to precipitation.

These three images show areas of lift rotating around low-pressure centers that's expected midday on Tuesday. Notice that the images are fairly similar, but not exactly the same. All three show a band of color in the Upper Midwest that would indicate an enhanced area of lift and likely precipitation (in this case snow) associated with that lift. However, in all 3 computer models, the orientation and intensity of this band is slightly different. So how do we know what will happen? Well, the short answer is, we don't.

There is no way to predict the future with 100% accuracy. This is one of a few reasons why you almost always see forecast snowfall in ranges, like 2" to 4", or 3" to 6". It's to account for these nuances as well as unknown variables with snow ratio (the overall moisture content of the snow) and the snow structure (the exact shape of the snowflakes, which can affect how it packs on the ground, greatly affecting snow depth).

Quite likely though, none of these forecast models are exactly right. More often than not it's a combo of some or all of them that end up in the "ballpark" of what will occur. So we'll see how things end up, but quite likely a few inches of snow will move through at least parts of Minnesota and will likely include the Twin Cities.