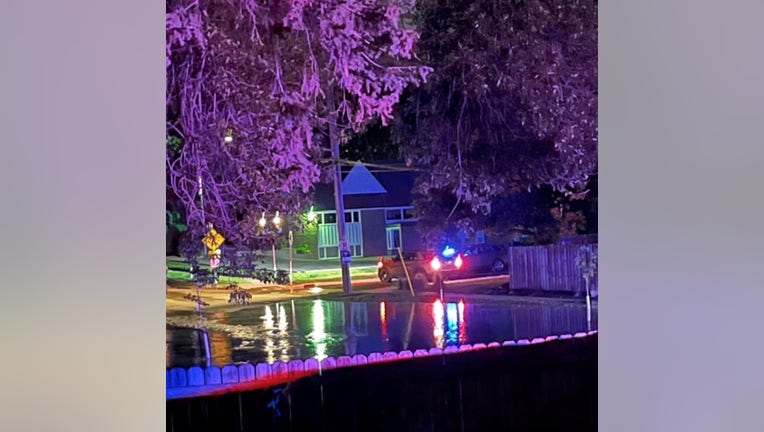 ST. LOUIS PARK, Minn. (FOX 9) - It happened again. The same St. Louis Park, Minnesota neighborhood devastated by a massive water main break in May was flooded again overnight by another water main break. Neighbors told FOX 9 an apparent sinkhole is forming at the location of the water main break.

"Last night, there was a second water main break in the same general location as the May 21 break," the city wrote in a statement to residents." We can’t express how terribly we feel that this situation has happened for a second time."

According to the City of St. Louis Park, crews were on site of the break on Minnetonka Boulevard between Sumter Avenue and Texas Avenue shortly before 11:30 p.m. Water was shut off by midnight and city staff are assessing damage to homes.

Minnetonka Boulevard is closed in the area and traffic is being detoured as repairs are ongoing. The city confirmed this break happened in the same general location as the May 21 water main break.

Waking up to water damage, again

A resident told FOX 9 that a neighbor on Rhode Island Avenue woke up to a water sensor sounding its alarm at 11:30 p.m. The sensor had been installed after the May 21 flooding. This recent flooding was the same as last time – water rising through the floor drains and re-flooding the basement.

Another neighbor called 911 at 12:40 a.m. Saturday after waking up to about three inches of brown water in their basement. As confirmed by the city, the 911 operator said the water had been shut off after the water main break an hour earlier.

On May 21, a massive water main break on Minnetonka Boulevard filled up nearly 60 homes on Quebec, Sumter and Rhode Island Avenues in the Oak Hill neighborhood with sewage water.

At first, the city blamed the break on the ground thawing, but residents FOX 9 spoke with think it is connected to a nearby construction project. The League of Minnesota Cities, which is the city of St. Louis Park’s insurance carrier, is investigating the cause of the break and will make a final determination about liability.

"We ran down here and it was already up to the bottom step and things are floating… it was shooting up out of the shower drain and the toilet," Julie North told FOX 9. ""Everything is destroyed. Everything had to be thrown out that had any contact with it."

Covering the cost of damage

On June 2, the League of Minnesota Cities Insurance Trust (LMCIT) determined the May 21 water main break is eligible for a higher level of coverage than originally thought – up to $40,000 per building and a $2,000,000 per occurrence limit. The LMCIT is sending a letter via email explaining what is available to those who have submitted a claim. This does not change the process property owners must follow for claims of damage resulting from the May 21 water main break. This includes first filing an initial claim with your homeowner’s or property insurance.

After the May 21 water main break, FOX 9 was told only 2 of the 55 homes that were impacted have add-ons to their general insurance policies that cover sewage damage.

It’s day six of clean-up for residents in St. Louis Park after a 65-year-old water main burst on Saturday, causing more than a million gallons of sewage water to spew into nearly 60 homes off Minnetonka Boulevard.

The St. Louis Park City Council meets Monday, June 6, at 5:15 p.m. for an economic development authority meeting, then a 6:30 p.m. regular meeting. At its 6:30 p.m. meeting the council will discuss the scope of damage of the May 21 water main break and options for impacted residents.

Affected residents are invited to attend an in-person neighborhood meeting Wednesday, June 8, at 6 p.m. at Lenox Community Center, 6715 Minnetonka Blvd., St. Louis Park. At that meeting, a representative of the League of Minnesota Cities Insurance Trust (LMCIT) will be on hand to answer questions and provide information. Elected officials and city staff will also be at the meeting to answer questions.