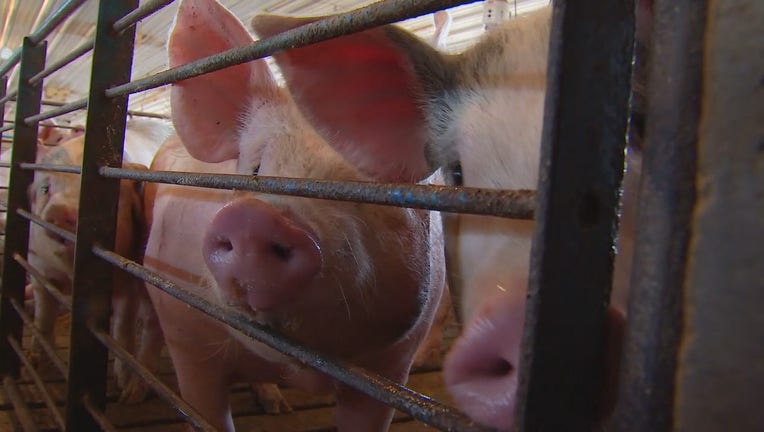 Minnesota hogs are being euthanized by the thousands thanks to supply chain issues triggered by the COVID-19 pandemic.

(FOX 9) - In a U.S. Senate hearing on the COVID-19 crisis Tuesday, Sen. Tina Smith highlighted the sad reality that Minnesota farmers are forced to destroy thousands of hogs each day to relieve a backlog from affected processing plants.

In Le Sueur County, the second of four planned hog disposal sites is now in operation to help farmers who have no choice.

In a U.S. Senate hearing on the COVID-19 crisis Tuesday, Sen. Tina Smith highlighted the sad reality that Minnesota farmers are forced to destroy thousands of hogs each day to relieve a backlog from affected processing plants.

It’s not something Selvik said he ever thought he’d see in his lifetime.

MORE: Why supply chain troubles led to the mass slaughter of hogs

The Waseca County farmer is putting down 500 hogs and hauling them to a disposal site in Le Sueur County to a location FOX 9 was asked not to disclose.

“Packing plants are gradually starting back up again, but we need them to rapidly get going to get back on pace,” he said.

The state of Minnesota worked with the Minnesota Pork Producers Association last week to open the first disposal site in Nobles County. Two more sites are in the works in addition to the Le Sueur County location. Each one will be able to euthanize several thousand hogs at no or minimal charge a day in an effort to soften the huge financial blow.

“It adds the ultimate insult to injury,” said Dave Preisler, CEO of the Minnesota Pork Producers. “Having no revenue, then also having to figure out a way to responsibly deal with the carcasses.”

Preisler says the plants are running about 70 percent capacity now, but it’s not enough to help the backlog. This is happening as hogs are getting too big for plants to handle while young pigs keep coming in.

“You can’t just turn a switch off,” he added. “The decision to actually produce that pig by breeding a sow is made 10 months ago, well before anyone heard of COVID.”

The fact that farmers feel no other choice but to destroy livestock and the fact that there needs to be fields devoted to the disposal of thousands a day underlines the crisis.

Everyone involved hopes plants can get to full capacity safely, but quickly.