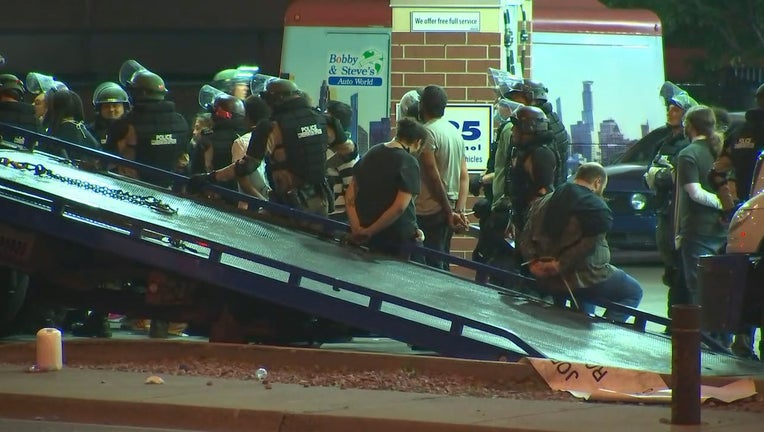 Protesters were arrested in Minneapolis Sunday night shortly after the 8 p.m. curfew went into effect. (FOX 9)

MINNEAPOLIS (FOX 9) - A total of 276 people were arrested Sunday and early Monday amid the protests over the Memorial Day death of George Floyd in Minneapolis police custody.

The Minnesota Department of Public Safety says the 276 arrests includes 150 people who were arrested in the area of Washington Avenue and Interstate 35W in Minneapolis shortly after the 8 p.m. curfew went into effect.

Protesters had moved back onto I-35W near the same spot where several hours earlier a semi had barreled through a peaceful march.

State and local authorities have arrested 481 people in the Twin Cities since Friday.

The curfew was established Friday after several days of protests and riots in the Twin Cities following Floyd’s death. The National Guard was called into to help quell the unrest and the state is now leading the response in Minneapolis and St. Paul.

Floyd died on May 25 after he was detained by Minneapolis police. A video taken by a bystander showed Officer Derek Chauvin kneeling on Floyd’s neck for nearly nine minutes as Floyd repeatedly says, “I can’t breathe.” Chauvin continued to press his knee onto Floyd’s neck even after he lost consciousness.

The other two officers holding Floyd down did not move from their positions until the ambulance arrived and the fourth officer standing nearby made no attempt to check on Floyd during the incident, despite bystanders’ pleas.

Protesters have been calling for harsher charges for Chauvin as well as for the other three officers to be arrested and charged.

The Minnesota Bureau of Criminal Apprehension and the FBI are continuing to investigate.