Commission Paul Schnell said leaders are still deciding on whether or not to extend a curfew for the Twin Cities to Monday.

MINNEAPOLIS (FOX 9) - Police have swept in and are starting to make arrests Sunday night as the city works to enforce another curfew.

As the curfew took effect at 8 p.m. in Minneapolis, a group of protesters returned to I-35W, hours after a truck drove through a massive crowd of people Sunday evening.

Thankfully, police say there have been no confirmed reports of injuries of protesters caused by the extremely dangerous incident. The driver involved was taken into custody after being treated in the hospital. 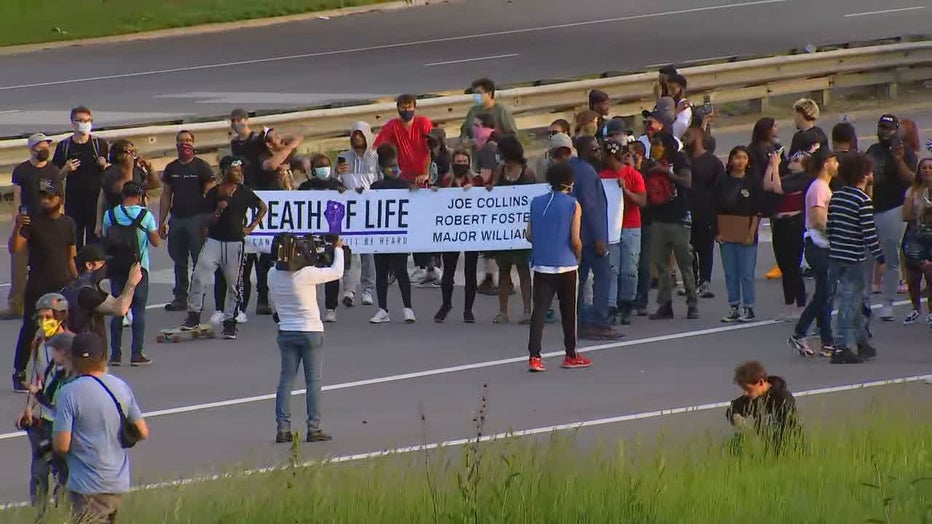 At around 8 p.m., a crowd moved back onto the I-35W highway at Washington Avenue near where the truck sped through.

Minutes later, police began taking steps to clear the area, moving the protesters back off the road. Since then, the crowd has moved off the road but many still remain nearby. However, our crews have witnessed efforts by police, shooting tear gas.

At about 9 p.m., officers, who had encircled the crowd, started making arrests. In a tweet, police say one gun had already been recovered from the scene.

In another tweet, the Department of Public Safety said 150 people were being arrested. They are warning people that anyone violating the curfew is subject to arrest.

In south Minneapolis, another group gathered near the site of George Floyd's death at 38th and Chicago as police began to move in there.

Speaking Sunday night, state leaders said the situation in Minneapolis appeared to be mostly under control. Mayor Frey agreed, saying compared to previous nights, there is certainly less chaos. However, he said the city is still far from normal.

Governor Walz and leaders from the Twin Cities are begging people to stay inside during curfew, which last in Minneapolis and St. Paul until 6 a.m. Monday morning. Officials say people who remain on the streets make it difficult for law enforcement to handle bad actors, looking to cause trouble.

Thousands of National Guard soldiers and airmen have joined troopers and police in crowd control efforts.