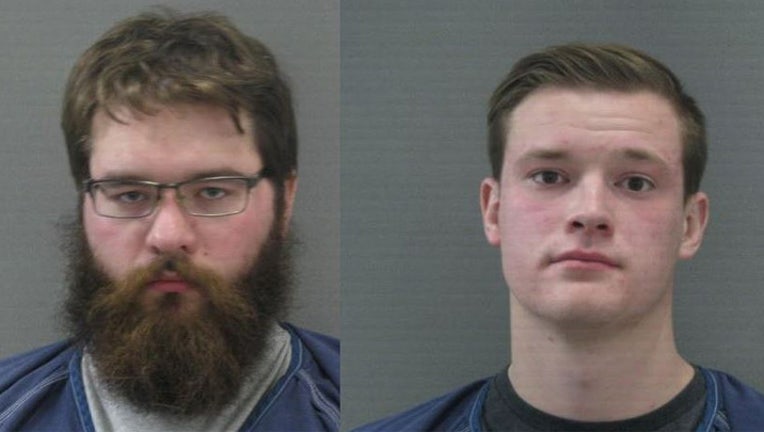 Harvey Michael Holcombe, 21, and Michael Fletcher Brewster, 22, are each charged with one count of criminal sexual conduct.

According to the criminal complaint, on Feb. 19, officials with the Carver County Sheriff's Office learned of a sexual assault that took place at Crown College. Officials learned that on Feb. 14, the victim was at his apartment on campus when Holcombe contacted him on Snapchat and asked him to come to his apartment. The victim said he couldn't come over, so Holcombe said he was coming to his apartment.

The victim was in his bedroom with the door closed when Holcombe and his roommate, Brewster, entered the room. According to the complaint, the victim then rolled out of bed and was on one knee when Holcombe knocked him down and sat on his chest. Brewster then said he was going to take off the victim's pants and proceeded to "yank" them down.

According to the complaint, the victim yelled for the men to stop, but Brewster then pulled the victim's underwear down, leaving his buttock's exposed. He then reportedly grabbed an Xbox controller and stated that he was going to "stick" the controller in the victim.

The victim then tried to block his buttocks area with his hands, but was unsuccessful.

Eventually, the victim was able to shake Holcombe off of him, and Brewster then let go of him.

The victim told authorities he was fearful for his life during the incident. After the incident, the victim took a call from a friend and left the room "because he was so upset," the complaint stated.

When the victim returned to his room, Brewster told him to sign into his YouTube account and said that if he didn't, Brewster would "do it again."

Both Brewster and Holcombe face a maximum sentence of 25 years and/or a $35,000 fine.