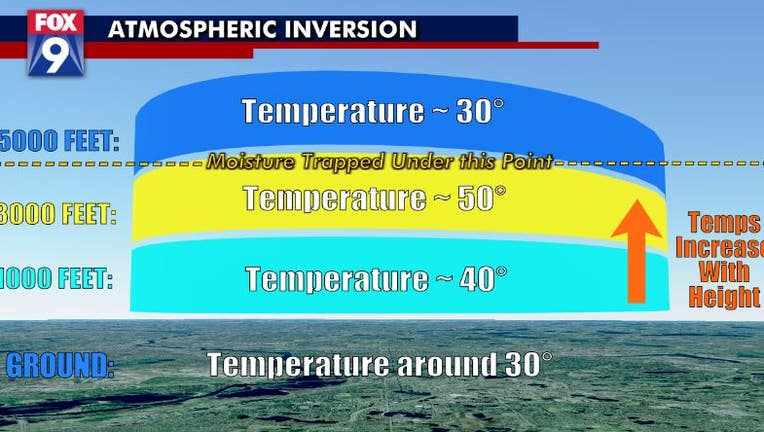 (FOX 9) - November can be a tough month for many of us as temperatures really start to tumble, we revert to standard time with the sunset before 5 p.m. and the reality that winter is about to set in hits you smack in the face. But it can be tough for a totally separate reason as well: it's REALLY cloudy.

In my experience, most Minnesotans don't mind the cold much of the time, as long as it's sunny. But, that doesn't usually happen in November. Well, there is a scientific explanation for that.

While temperatures certainly start cooling in September and October, our first shot of truly Arctic air doesn't usually show up until November. Cold air is more dense than warm air which makes arctic air VERY dense. This cold air will sit right at ground level as it slides southward overtaking much of the state. But it's a very shallow layer of cold air, which means the air just a couple thousand feet above our heads is often warmer than right here at the surface. With warmer air above colder air, that makes a stable atmosphere, meaning warm air cannot rise to form precipitation. This is called a temperature inversion.

Even though precipitation can't typically form in this setting, clouds can. Moisture gets trapped underneath the inversion zone... especially around here with plenty of relatively warm lakes adding evaporated water to the low levels of the atmosphere. This forces the moisture that's stuck to gather in the zone just underneath the inversion. If you get enough moisture to hover in this spot, clouds eventually form.

Think of it like a boiling pot of water. Leave it uncovered, and no condensation can be seen in the room because that moisture can fan out across the house, much like it would fan out in the atmosphere. But if you add a lid to that pot, like an inversion, you will quickly see condensation form underneath the lid. The atmosphere works in a very similar manner.

While this is quite common in Minnesota this time of year, it does happen in many other locales across the U.S. at one time or another. Here is an example of one such occasion from the National Weather Service in Little Rock, Arkansas. 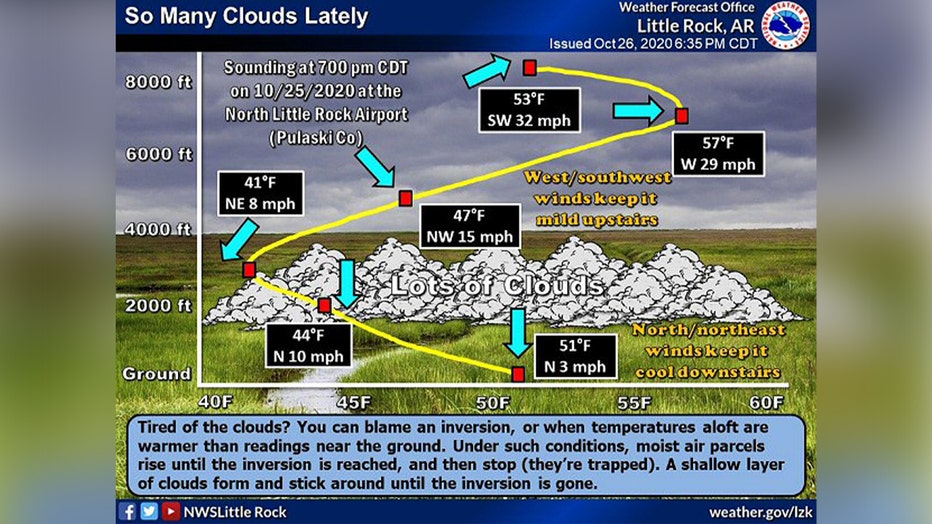 This is a very similar circumstance with moisture getting trapped underneath a low-level inversion.

November is the cloudiest month here in Minnesota on average. February and March aren't far behind for much the same reason...cool air at ground level trapping LOTS of low-level moisture because of our often deep or melting snowpack.

Get the FOX 9 weather app to track winter weather live on your phone with the latest temperatures, snow totals, forecasts and school closings 24/7 customized for your current location and favorite locations. Download it at fox9.com/apps