(FOX 9) - After a very nice, albeit windy, weekend, we’re heading for a wet couple of days as our next storm moves in with plenty of early spring moisture.

In fact, some areas could get March’s average monthly rainfall total in just two days. But unlike March of past years, this one continues to act more like April as our next system will be quite warm for early spring. The storm is expected to be almost entirely liquid, although a few flakes certainly can’t be ruled out.

Timing of our next storm

A storm will move in overnight Monday into Tuesday, bringing plenty of early spring moisture.

Moisture should really start to increase after sunset Monday with light showers possible overnight. While rain may continue for the first half of Tuesday in the west, the Twin Cities may see a pretty large break in the activity until sometime Tuesday afternoon.

Widespread rain with locally heavy downpours is likely to develop during the second half of the day and then hang around Tuesday night and the first half of Wednesday as colder air starts to pour in, leading to a seasonably cool day Wednesday. 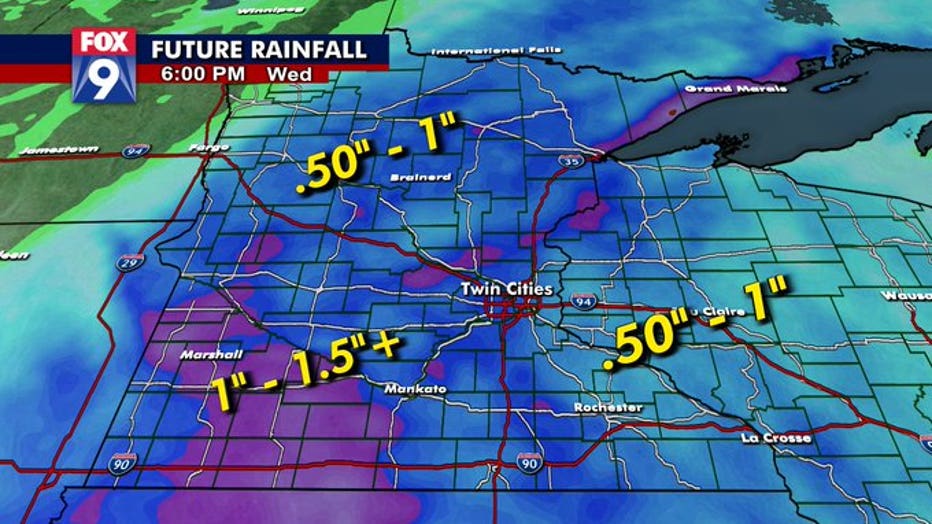 Between Monday and late Wednesday, much of central and southwestern Minnesota could see upwards of 1.5 inches of rain with closer to an inch in the Twin Cities. (FOX 9)

Everyone is likely to get at least a half inch of rain out of this, but there will be some areas that get well north of an inch, possibly approaching two inches in local spots southwest of the Twin Cities. For the metro, rainfall totals on either side of an inch are likely, although there could certainly be small pockets upwards of an inch and a half.

Snow will be nearly a non-factor with this storm. It’s rain for the Twin Cities, although we certainly can’t rule out a snowflake or two mixing in early Wednesday morning, but chances for any accumulation are as close to zero as you can get in mid to late March. Much farther north though, there could be some very isolated minor accumulations for places like Grand Rapids eastward to the North Shore, but even that is a stretch at this point.