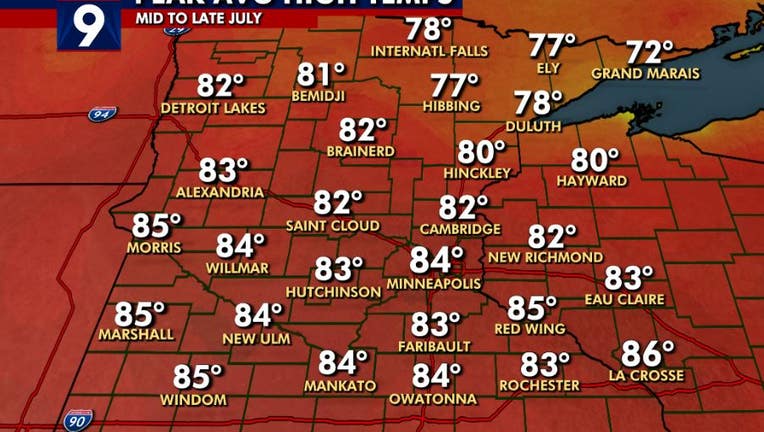 (FOX 9) - Now that we are midway through the summer months of June, July, and August, we are starting to push through the warmest time of the year on average.

This is the time of year when our climatological temperatures reach their peak, but that doesn't necessarily mean it will be the warmest weeks of the year this year.

It can be a little confusing, but climate is the long-term averages for our weather. This is the average of all of our weather put together. Doing this gives us a climate curve for average high and low temperatures, and this time of year, that very gradual curve peaks over the next couple of weeks.

The average high temperature in the Twin Cities peaks at 84° and the average low temperature peaks at 66°. Then just before the end of the month, both of those average numbers begin their very gradual fall over the following few weeks before decreasing at a much faster rate as we head through fall toward the winter minimums in late January.

But this temperature curve is not the same for all locations across the country. Some areas see average temperatures peak earlier in the summer, while it takes others all the way to September to finally see numbers start falling.

Check out the dates that both average highs and lows peak across the country: 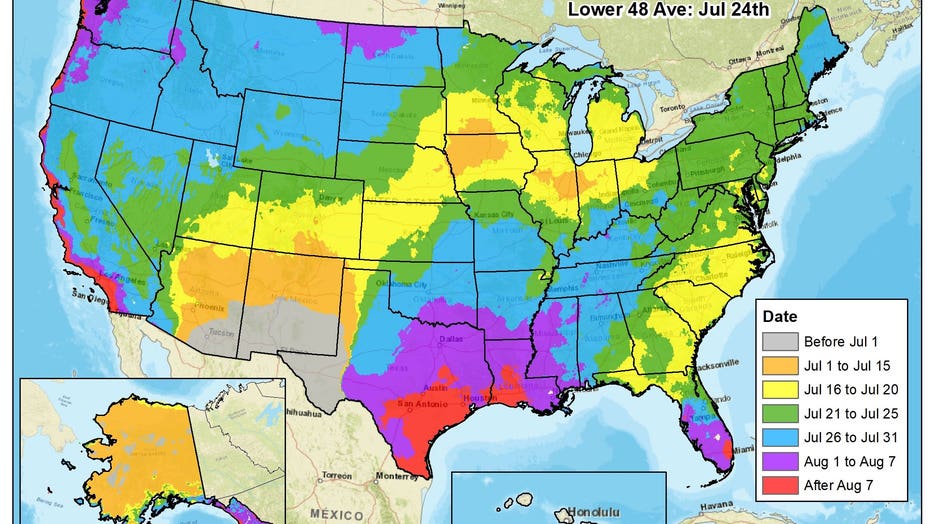 Now that we are midway through the summer months of June, July, and August, we are starting to push through the warmest time of the year on average.  (FOX 9)

The three factors that dictate when temperatures hit their peak nationwide are moisture, sun angle, and cloud cover. The higher the moisture levels, the cooler the temperature is during the afternoon on average. So peak temperatures are often when cloud cover doesn't get in the way, leading to high levels of warming thanks to a very high sun angle, and high moisture levels don't necessarily get in the way, or it's a time of year that drier air can filter in from time to time, leading to a spike in temps. 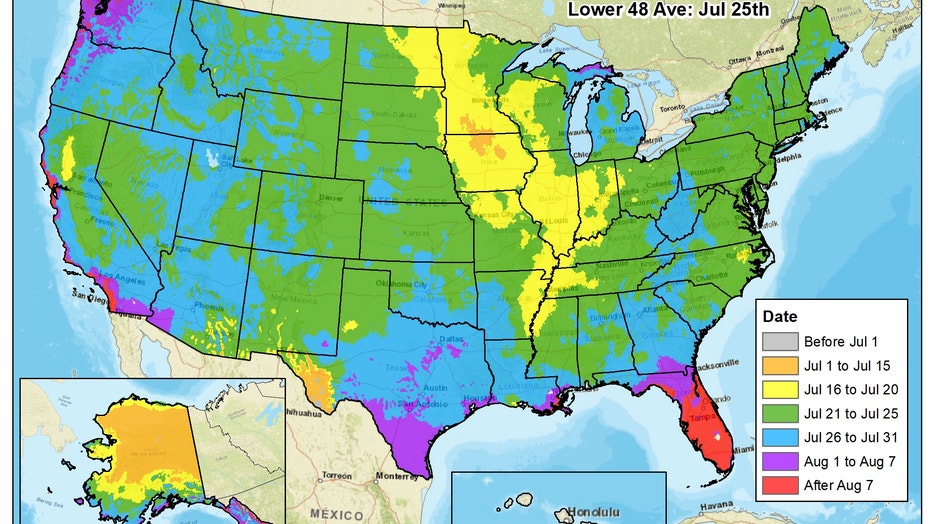 For much of Minnesota and the Upper Midwest, it's the latter half of July when temperatures are at their warmest on average. Now, moisture levels are usually near their peak as well, but that leads to much warmer overnight lows that give a warmer starting off point often leading to warmer afternoons. Not to mention, the sun angle is still near it's highest levels and the cloudy rainy days are a thing of the past as isolated storms take over the landscape leading to plenty of warmth in between.

But it varies wildly nationwide. For the Desert Southwest, it's as early as June, before the Monsoon takes over and moisture levels force temperatures to fall a little. For the West Coast, it's not until September, when the cloud cover associated with the "marine layer" pushes back out to sea after encompassing the coastline for much of June and July. For areas of the southeast including south Florida, it's not until August because ocean temperatures play such a role in overall temps, and the Gulf of Mexico's temperatures peak much later in the summer season, leading to a delay in peak temps in areas around it.

Now, keep in mind that this is referring to climatology and NOT the week of the year that's the warmest in any given year as that can vary by several weeks. As for this year, if the longer-range computer models are correct, there's a good possibility that the second half of July will certainly live up to it's reputation this year in the Upper Midwest.