Seasonable temperatures return for the weekend, with highs climbing into the upper 70s and 80s with some humidity.

(FOX 9) - After our seemingly never-ending winter and flash of a spring, we're now into the summer months which means we're finally consistently warm. Over the last couple of weeks, we have primarily experienced the 70s, but the summer-style 80s and humidity aren't too far away. But did you know, of all the "temperature sectors," the most common found in the Twin Cities are the 80s? 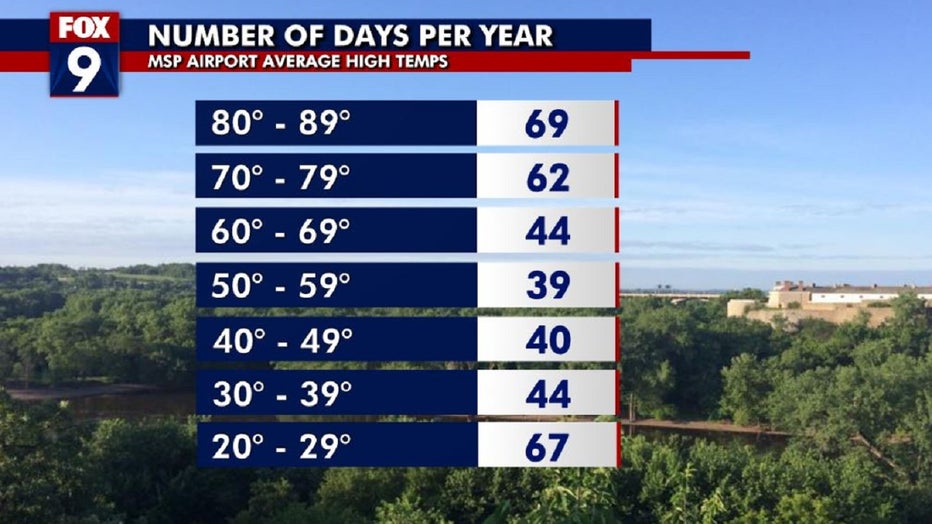 Through the course of a year, the Twin Cities experiences average daily highs ranging from 23 degrees in the heart of winter to the mid-80s in the heart of summer. The average daily highs are an overall average of the daily high temperature for each individual day of the year, over the course of the nearest 30-year climate period as indicated by the National Weather Service. The key here is "average" high temperature for each day. Obviously, we have much colder days during the winter than the 20s and much warmer days in the summer than the 80s, and literally everything in between. But the average gives you a gross generalization of what can be expected on each individual day through the year.

When adding up all 365 days, the most common range of temperatures actually starts with an eight. On average, the Twin Cities experiences 69 days a year with temperatures in the 80s, more than any other range of temps. Second place on average, to nobody's surprise, is the 20s. And then amazingly, third place is the 70s.

That means that for more than one-third of the year, we enjoy highs at or warmer than 70 degrees … far higher, I'm sure, than many realize. While we average 69 days in the 80s, more often than not it's quite a bit fewer. These are average highs that don't consider the ups and downs of daily and weekly temperature swings. For example, the Twin Cities will average more than a dozen days a year with high temperatures in the 90s, but do not appear in the climatological averages because we don't see enough of them at any given time of year to allow our average highs to climb that high. Here is a map from the state climatologist out of Alaska showing the number of days per year that areas across the U.S. experience highs in the 90s on average. 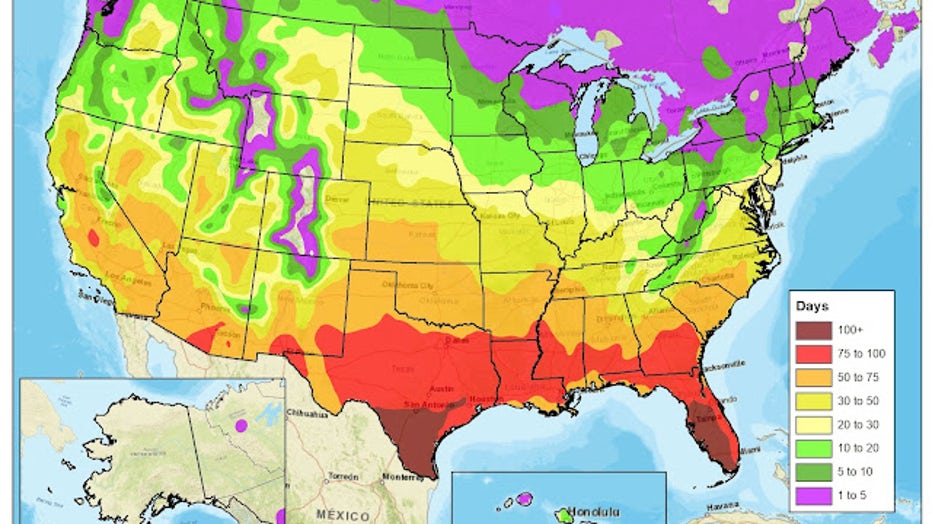 It's similar in the winter, when average highs dip to the low 20s, but we obviously experience plenty of days with highs in the teens, single digits, and subzero. Here is a look at the number of times areas across the U.S. experience subzero highs per year on average. 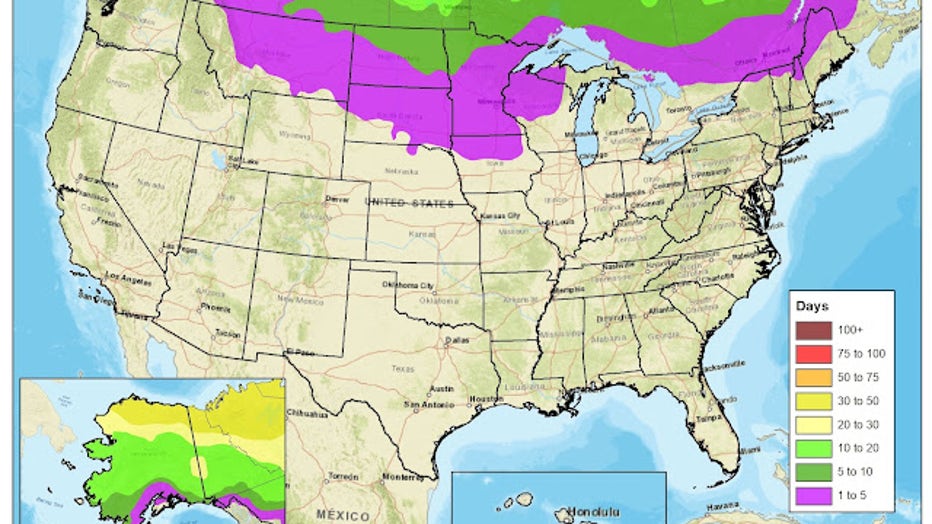 The number of days per year with subzero highs.  (FOX 9)

As you would expect, it's a very small area of the country that actually experiences subzero high temps, all relegated to the Upper Midwest. This of course only considers non-mountainous areas. The Twin Cities averages about one per year, but the Grand Forks area gets the most in a typical year, averaging about a week.

One of the largest complaints I here is that we don't often have much of a spring or fall, and seem to skip the comfortable 60s and 70s. To a certain extent, you are correct. We have had a couple of seemingly very short springs in the last few years. But we have more than made up for it in the summer and fall with 60s and 70s often continuing into November … something that has become more common in the last 20 years.

Check out how many days over the last few years we have experienced high temps in the more "comfortable" zone: 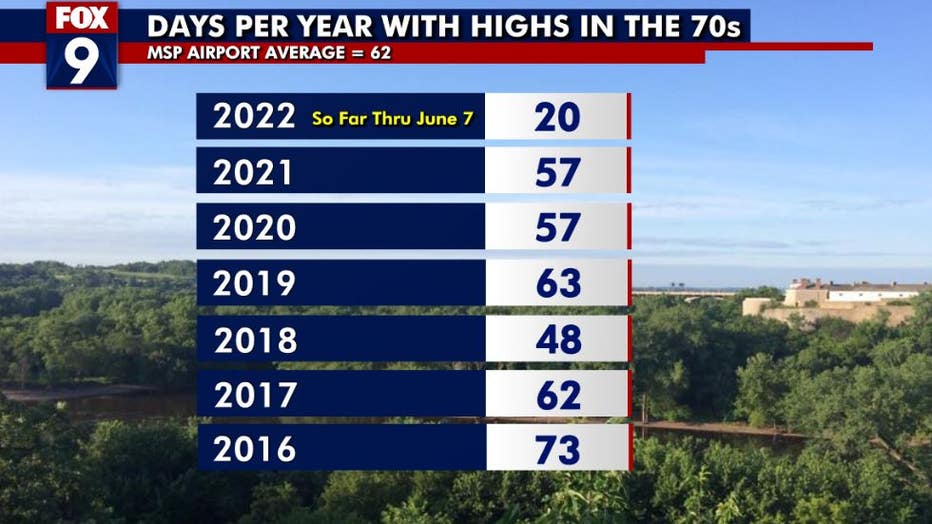 The number of days per year in the Twin Cities with highs in the 70s. (FOX 9) 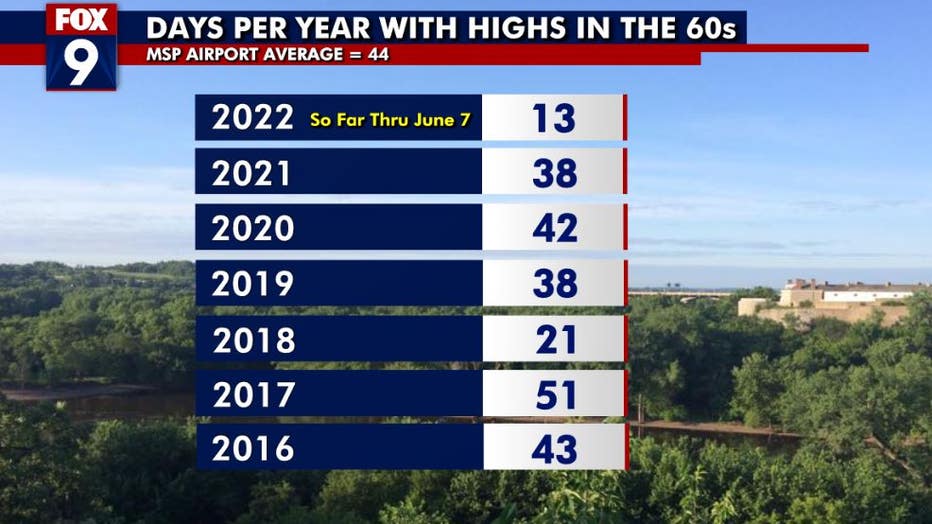 The number of days per year in the Twin Cities with highs in the 60s. (FOX 9)

See, we do spend a lot of time in the comfortable zone! In the last two years, we've had almost two full months spent in the 70s. Now, the 60s admittedly are far less common, but still a good chunk of time.

If you're looking for the averages for the rest of our temperature sectors, check out the climatologist's tweet below:

The big difference, though, is that our "comfortable" days are usually spread out. While we get a vast majority of them in the traditional warm months, we can sprinkle them in from March through November. This likely gives the impression that we experience far fewer of them than what really happens.

Comparing us to Phoenix, Arizona, for example, we experience almost as many days with highs in the 70s as they do. Seriously! We average 62 days per year, Phoenix gets a little over 70 on average … so about a week to 10 days more. But, most of these occur in their cool season in an almost consecutive fashion. They will get almost all of their 70s from November to February. Having so many close together can certainly make it feel like the comfortable days never end, and many residents get their fill. Not to mention, there are many other mitigating factors that can add to the comfort like low humidity, lower sun angle, fewer flying insects, etc.

So I understand why many think it's never "nice" here, but that just isn't the case.