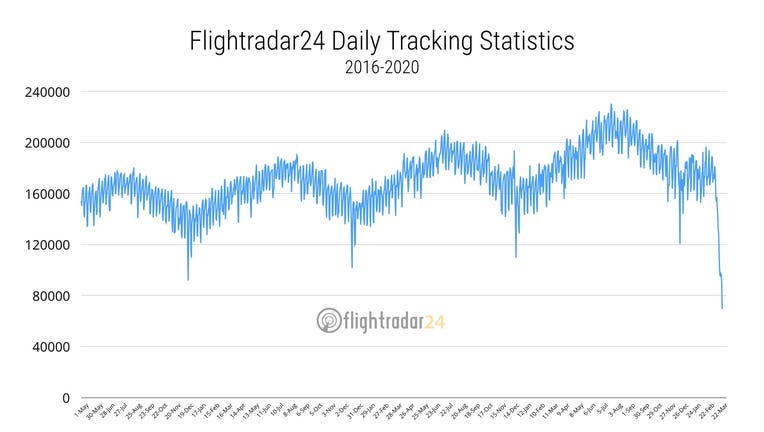 The number of daily flights tracked by Flightradar24 worldwide over the last 4 years. That number is plummeted drastically in the last couple of weeks.

KMSP - With COVID-19 shutting down many components of daily life from restaurants to schools to the way we travel, it was only a matter of time before it effects everything in your life--and that includes your forecast.

The most obvious way the coronavirus has changed the forecast is how you receive it. Many of us TV meteorologists are now working from home, broadcasting using myriad technological devices that have finally made it possible to give you the forecast from almost anywhere. This would not have even been a possibility as recently as five years ago. So, imagine if this was still the 1990s. It would be so. much. harder. For everyone.

But, COVID-19 is changing life in at least one avenue you cannot see; the accuracy of our forecasts. While many still seem to think that meteorologists get the forecast wrong half of the time, I can assure you that is just not the case and I have written many articles over the years proving said misconception. But, our 95 percent success rate on average may take a bit of a hit in the weeks and months going forward. That is because air travel is coming to a screeching halt.

Meteorologists are able to predict the future using sophisticated computer models that ingest an enormous amount of information about the current conditions all around the globe. These computers then run thousands of algorithms based on the principles of fluid and thermodynamics to come up with an idea of what the weather will be like on the globe for the next hours, days, and weeks. Well, some of that enormous amount of data that gets collected is actually through airplane sensors.

Humans live at ground level, so the bulk of our observations come from the surface. But the atmosphere is tens of thousands of feet deep, so we need to take measurements from as much of that is possible.

While the National Weather Service launches weather balloons to help get a snapshot of the column of the atmosphere, there are airplanes around the world that are fitted with the equipment to both take and send observations as they fly to and fro. But now that many airplanes are grounded, those observations are not being taken, which means the forecasting computer models have fewer data points to process the very complex state of the atmosphere.

With less information available, the computer models may struggle to get a complete picture, which could lead to forecasting challenges and errors in the coming weeks and months.

Daily upper air observations uploaded to the US GFS weather forecasting computer model from commercial aircraft. The number of observations has trailed off from just under 5000 at the beginning of the month, to just over 2000 by the end.

That said, do not expect to see a forecast high of 50, and we randomly make it to 85 degrees that day. Even without the use of airplane observations, we as forecasters are way more knowledgable than that.

But, it will likely be the subtleties of the forecast, like being cloudier than expected or getting a touch of light rain when nothing is in the forecast--little nuances like that.

Many may not notice a change at all because many meteorologists can already account and adjust for computer model inefficiencies. That is just one of several reasons why human meteorologists are still needed and still produce better forecasts than a computer. So, do yourself a favor and put away that weather app and turn on the TV, because we humans will be far more accurate...and more entertaining to boot.