An underwater volcano has erupted near the Pacific nation of Tonga, sending large tsunami waves crashing across the shore and people rushing to higher ground. (Credit: RAMMB/CIRA via Storyful)

WELLINGTON, New Zealand (AP) - New Zealand’s military on Monday morning was able to send a surveillance flight to Tonga to assess the extent of the damage from a huge undersea volcanic eruption.

A towering ash cloud had prevented the military from launching any flights earlier to the Pacific island nation.

People on Tonga described their country as looking like a moonscape as they began the task of cleaning up from the tsunami waves and ash fall caused by the eruption. Communications with the island nation remained limited after the internet was cut soon after the eruption on Saturday evening.

There were no reports of injuries or deaths, although concerns remained for the fate of people on some of the smaller islands near the volcano.

Meanwhile, scientists said they didn’t think the eruption would have a significant impact on the Earth’s climate.

Huge volcanic eruptions can sometimes cause global cooling as sulfur dioxide is pumped into the stratosphere. But in the case of the Tonga eruption, initial satellite measurements indicated the amount of sulfur dioxide released would only have a tiny effect of perhaps 0.01 Celsius (0.02 Fahrenheit) global average cooling, said Alan Robock, a professor at Rutgers University. 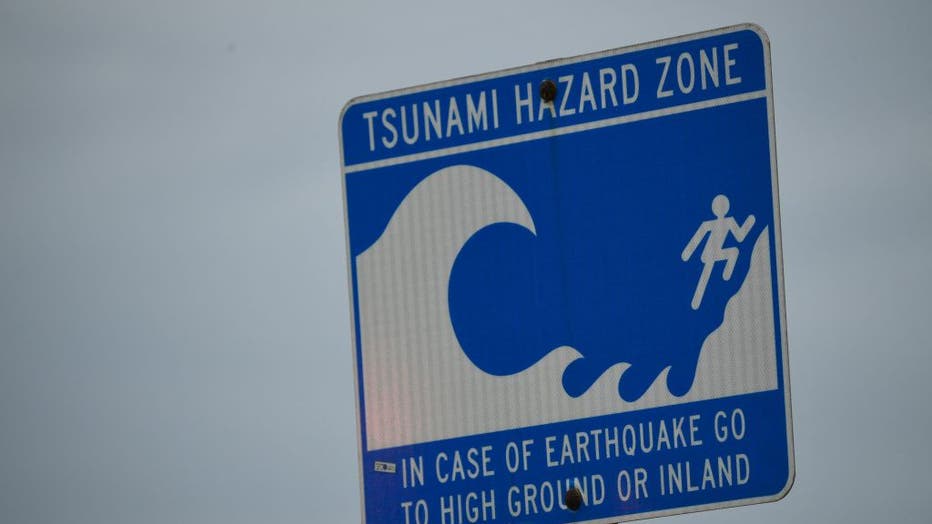 A tsunami hazard zone sign is displayed near a beach in El Segundo, California, on January 15, 2022. - The US National Weather Service issued tsunami advisories for the entire west coast of the United States following a massive volcanic eruption acro

Satellite images showed the spectacular undersea eruption Saturday evening, with a plume of ash, steam and gas rising like a giant mushroom above the South Pacific waters.

A sonic boom could be heard as far away as Alaska and sent pressure shockwaves around the planet twice, altering atmospheric pressure that may have briefly helped clear out the fog in Seattle, according to the National Weather Service. Large waves were detected as far as the Caribbean due to pressure changes generated by the eruption.

In Tonga it sent tsunami waves crashing across the shore and people rushing to higher ground.

With internet and phone lines down, friends and family members around the world were left anxiously trying to get in touch.

Government websites and other official sources remained without updates on Sunday afternoon.

New Zealand Prime Minister Jacinda Ardern said Sunday there had not yet been any official reports of injuries or deaths in Tonga, but cautioned that authorities hadn't yet made contact with some coastal areas and smaller islands.

"Communication with Tonga remains very limited. And I know that is causing a huge amount of anxiety for the Tongan community here," Ardern said.

She said there had been significant damage to boats and shops along the Tongan coastline. The capital, Nuku'alofa, was covered in a thick film of volcanic dust, Ardern said, contaminating water supplies and making fresh water a vital need.

The Orange County Sheriff’s Department issued a tsunami warning as they flew over Huntington Beach, California, on Saturday, January 15, warning locals to move away from the water and beach. (Credit:@patti_eckert via Storyful)

In a video posted on Facebook, Nightingale Filihia was sheltering at her family's home from a rain of volcanic ash and tiny pieces of rock that turned the sky pitch black.

"It’s really bad. They told us to stay indoors and cover our doors and windows because it’s dangerous," she said. "I felt sorry for the people. Everyone just froze when the explosion happened. We rushed home." Outside the house, people were seen carrying umbrellas for protection.

Ardern said New Zealand was unable to send a surveillance flight over Tonga on Sunday because the ash cloud was 63,000 feet (19,000 meters) high but they hoped to try again on Monday, followed by supply planes and navy ships.

One complicating factor to any international aid effort is that Tonga has so far managed to avoid any outbreaks of COVID-19. Ardern said New Zealand's military staff were all fully vaccinated and willing to follow any protocols established by Tonga.

Dave Snider, the tsunami warning coordinator for the National Tsunami Warning Center in Palmer, Alaska, said it was very unusual for a volcanic eruption to affect an entire ocean basin, and the spectacle was both "humbling and scary."

The tsunami waves caused damage to boats as far away as New Zealand and Santa Cruz, California, but did not appear to cause any widespread damage. In northern Peru’s Lambayeque region, two women drowned after being swept away by ″abnormal waves″ following the eruption, authorities said.

Tsunami advisories were earlier issued for Japan, Hawaii, Alaska and the U.S. Pacific coast. The U.S. Geological Survey estimated the eruption caused the equivalent of a magnitude 5.8 earthquake. Scientists said tsunamis generated by volcanoes rather than earthquakes are relatively rare.

Rachel Afeaki-Taumoepeau, who chairs the New Zealand Tonga Business Council, said she hoped the relatively low level of the tsunami waves would have allowed most people to get to safety, although she worried about those living on islands closest to the volcano. She said she hadn’t yet been able to contact her friends and family in Tonga.

"We are praying that the damage is just to infrastructure and people were able to get to higher land," she said.

U.S. Secretary of State Antony Blinken wrote on Twitter he is "deeply concerned for the people of Tonga as they recover from the aftermath of a volcanic eruption and tsunami. The United States stands prepared to provide support to our Pacific neighbors."

Tonga gets its internet via an undersea cable from Suva, Fiji. All internet connectivity with Tonga was lost at about 6:40 p.m. local time Saturday, said Doug Madory, director of internet analysis for the network intelligence firm Kentik.

On Tonga, which is home to about 105,000 people, video posted to social media showed large waves washing ashore in coastal areas and swirling around homes, a church and other buildings. A Twitter user identified as Dr. Faka’iloatonga Taumoefolau posted video showing waves crashing ashore.

The explosion of the Hunga Tonga Hunga Ha’apai volcano, about 64 kilometers (40 miles) north of Nuku’alofa, was the latest in a series of dramatic eruptions. In late 2014 and early 2015, eruptions created a small new island and disrupted international air travel to the Pacific archipelago for several days.

Earth imaging company Planet Labs PBC had watched the island in recent days after a new volcanic vent began erupting in late December. Satellite images showed how drastically the volcano had shaped the area, creating a growing island off Tonga.

"The surface area of the island appears to have expanded by nearly 45% due to ashfall," Planet Labs said days before the latest activity.

It’s too early to tell how much ash was produced by the eruption because the volcanic cloud included vapor resulting from sea water interacting with the hot magma, experts said.

The eruption in shallow water may be similar to a series of eruptions between 2016 and 2017 that shaped Bogoslof Island north of the Aleutian Islands, said Michelle Coombs, a scientist at the U.S. Geological Survey's Alaska Volcano Observatory.

"When it erupts in shallow sea water, that interaction between hot magma and sea water adds extra energy to the explosion and creates taller and bigger ash clouds," Coombs said.

The ash cloud was drifting westward and aircrafts will be likely diverted around its periphery as a precaution, said Scott Bachmeier, a research meteorologist at the University of Wisconsin-Madison.