Our heat and humidity is likely here to stay

After finishing the warmest June in 15 years in the Twin Cities, we crank up the heat even further as we head through the first week of July and our long Independence Day weekend.

After finishing the warmest June in 15 years in the Twin Cities, we crank up the heat even further as we head through the first week of July and our long Independence Day weekend. While highs in the upper 80s and low 90s are far off from daily record highs, and not exactly unusual around here in July, it will likely be the persistence of these 90 degree temps that will wear us down… and could set records themselves.

North America is beginning to enter a very stagnant weather pattern. In the weather world, we call this an Omega block. The term is derived from the greek symbol itself. It’s called this because the jet stream (that steering current for the atmosphere, like a river of air that floats above our heads) gets kinked in the shape of the greek symbol omega. Much like a tight knot in a rope, once formed, this kink can be very hard to straighten out. This leads to very little change in the areas that are affected. In this case, much of North America. 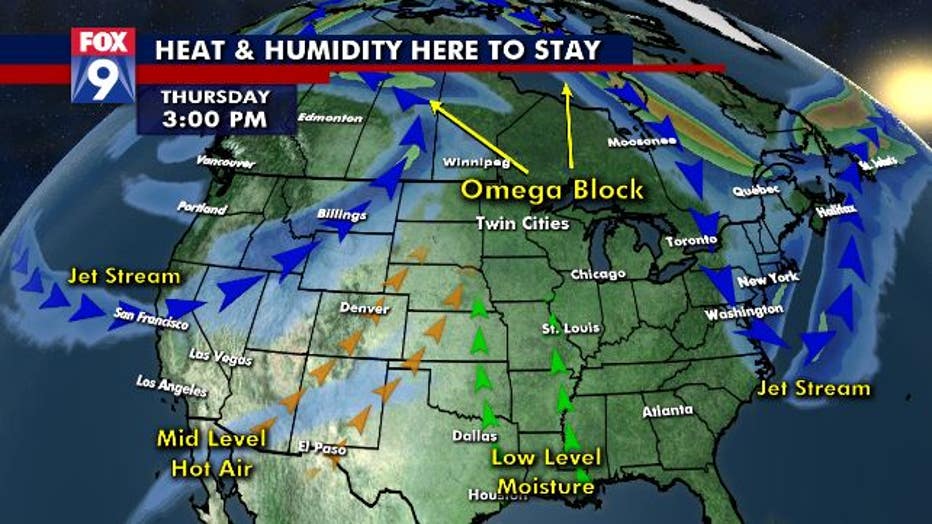 The jet stream goes up into northern Canada, kinks in the Pacific Northwest. Then kinks again because of a cut off low just north of New England. This puts the jet stream in that omega shape. What this does then is the natural flow between high and low pressure forces very warm air to surge up from the Desert Southwest as well as very moist air to surge northward from the Gulf of Mexico. When combining both of these, you often get VERY hot and humid days.

The overall strength and duration of these omega blocks can vary wildly and are not easily predicted by humans or computers alike. Therefore, how long this overall pattern hangs around is really unknown. That said, these stagnant patterns can and often do last for weeks, even more than a month in some cases, which would likely set the stage for one of the warmest months on record… IF it actually lasts that long. 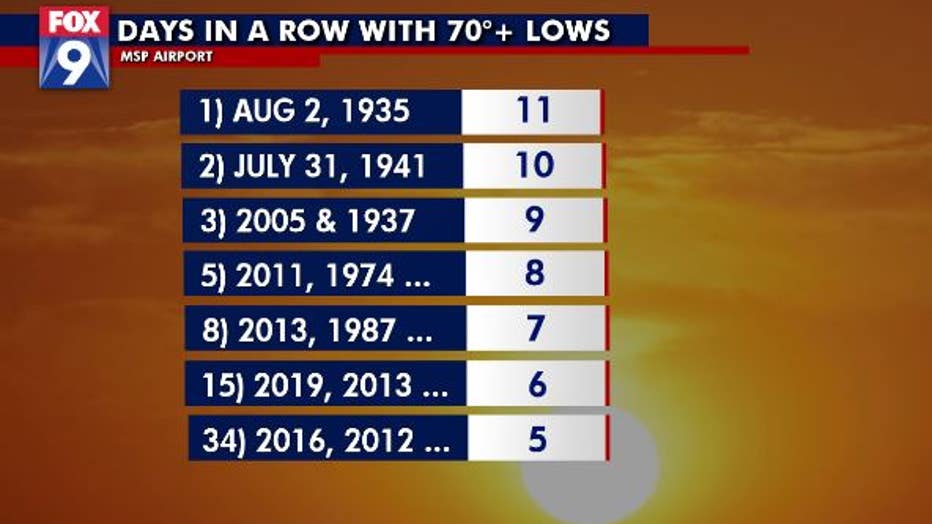 Like I mentioned though, it’s not so much the daily high heat as it would be the persistence of the steamy heat that will be the story over at least the next week. In fact, the current forecast (barring overnight thunderstorms that can cool us off slightly) would give us at least 9 consecutive days with an overnight low at 70˚ or higher. That would tie for the 3rd longest streak on record in the Twin Cities. And would be just 2 days shy of the record set back in the Dust Bowl era of 1935.

The overall record for consecutive days in the 90s is longer, at 14 days. This would be far more difficult to get to and not likely to happen at this point, even in our current pattern. But goes to show that even getting say 12 of the next 14 days in the 90s would be quite unusual. It would also help catapult this summer as the warmest since 2012.