Chilly sunshine Tuesday afternoon with flakes for far northern Minnesota. A second skiff of snow rolls through the state late Tuesday into Wednesday morning, before its back to cold sunshine Wednesday afternoon.

MINNEAPOLIS (FOX 9) - Chilly sunshine is in the forecast for Tuesday, and colder sunshine is expected on Wednesday.

The high on Tuesday is near 30 degrees for the Twin Cities metro area. Overnight, it'll dip down to about 15 degrees and be mostly cloudy.

Wednesday won't be much warmer than Tuesday's low, with a high of 20 degrees and sunshine in the forecast.

Warmer temperatures are in our future, though. Temperatures will start to rebound on Thursday, and by this weekend highs will be in above freezing – around 34-35 degrees – in the Twin Cities.

Chances for snow this week

A band of snow is spreading across parts of northern Minnesota on Tuesday, which could bring a couple of inches of snow to the area. But it'll miss the Twin Cities metro.

Another band of low pressure could bring snow to central Minnesota on Wednesday, but there are still some question marks on how south the band of snow could reach, and whether that means snow for the Twin Cities metro.

There's also a possibility of snow Thursday, but it's too far out to determine if it stays to the south or brings snow to the area. 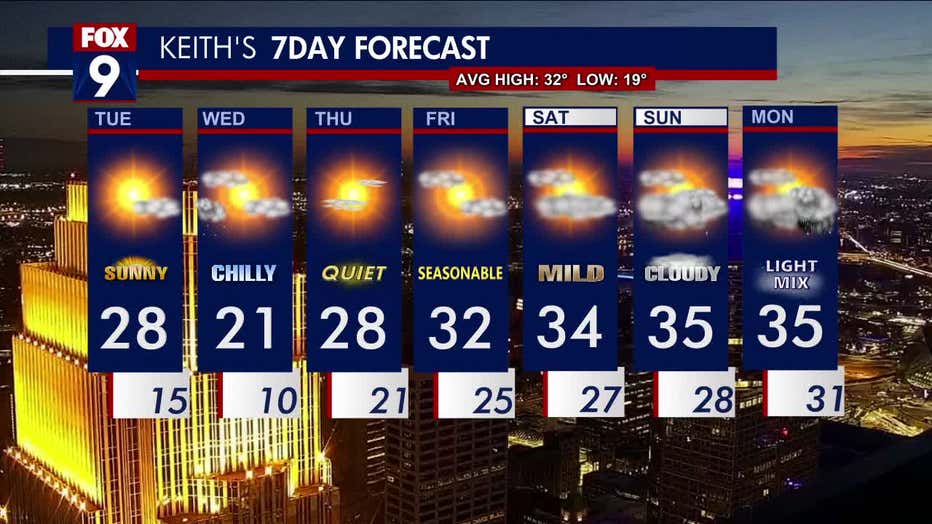