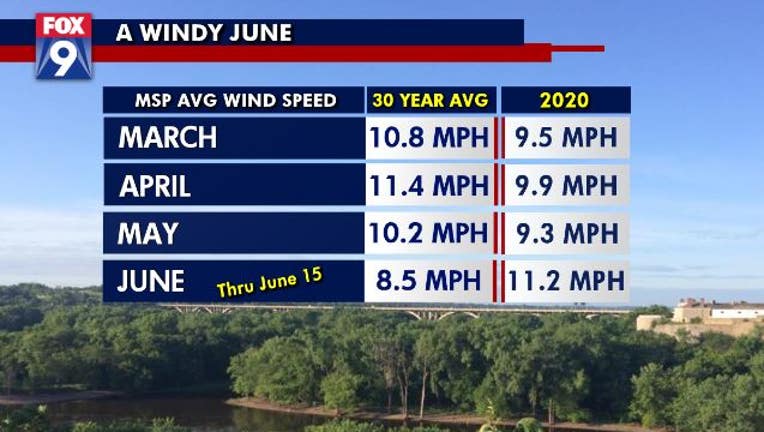 The really warm start to June may have escaped you, it’s a summer month after all so the warmth is expected, but I doubt the wind has blown by you without notice. Gusty breezes have made themselves well known over the last few days with what has felt like one long never ending gust. While Minnesota is a fairly breezy place, especially farm country across the western half of the state, the first half of June has been a bit unusual.

So far this month, wind speeds have averaged nearly 3 mph higher than the 30 year climate normal. The average speed in 2020 has topped 11 mph, with the long term 30 year average right around 8.5 mph. While a couple miles per hour isn’t a lot in a momentary instance, it is a pretty big jump when you combine every hour for more than 2 weeks.

Perception with our windy June though might be playing more of a significant role than with other windy months. March, April and May were all below average in terms of wind speeds as well as the the overall number of windy days. With that in mind, a sudden and persistent breeze may make it seem much stronger than it really is… a lot like suddenly getting 80 degree temperatures in the month of April. At that point, we just aren’t used to them, so they would seem much warmer than other 80 degree days later in the year. Regardless though, air movement in Minnesota so far this June has been much higher than in years past.