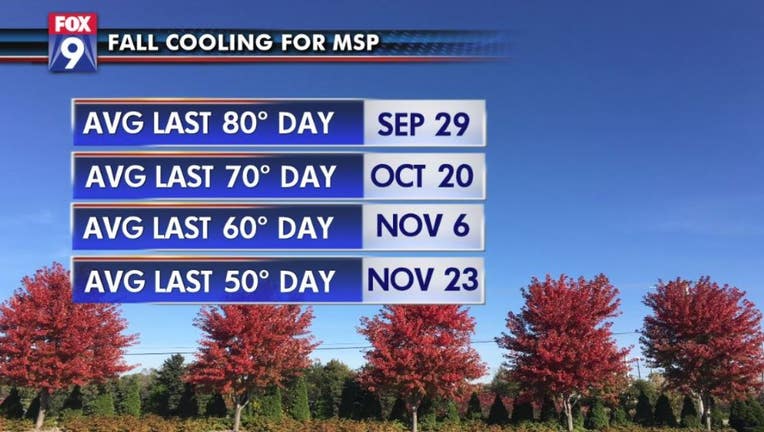 (FOX 9) - The calendar may now read Fall - though it doesn’t officially begin until the 23rd - but that doesn’t mean our warmth for the year is behind us.  While the extreme heat is likely behind us, with 90 degrees getting increasingly harder and harder to achieve, there is likely still plenty of warmth left though before our “true” cool weather begins.

I realize that the definition of “warmth” is in the eye of the beholder, but for argument sake, we’ll describe warmth as temps you don’t need a jacket for. I’d say for most of us, that’s anything above 60 degrees.  But, even for those that feel 60s are too cool, we still have several weeks of warmth left.

While it’s been a while since we’ve seen an 80 degrees, with the last one occurring on August 21st, we likely have at least a couple more in our future because the typical last 80 degrees doesn’t happen until the end of the month, the 29th on average. The latest we’ve ever seen a 80 degrees was actually on Halloween in 1950. For the 70s it’s an additional 3 weeks or so for those to last, with the average last 70 degree day not occurring until October 20th.  The latest day the 70s have ever occurred in the Twin Cities was nearly Thanksgiving, on November 17 of 1953.

But by November, temperatures do start to tank as we see our average last 60 & 50 degree days during the month. But, hey, that gives us a good two months of warmth to go… not to mention, plenty of fall colors, bonfires and hoodies.