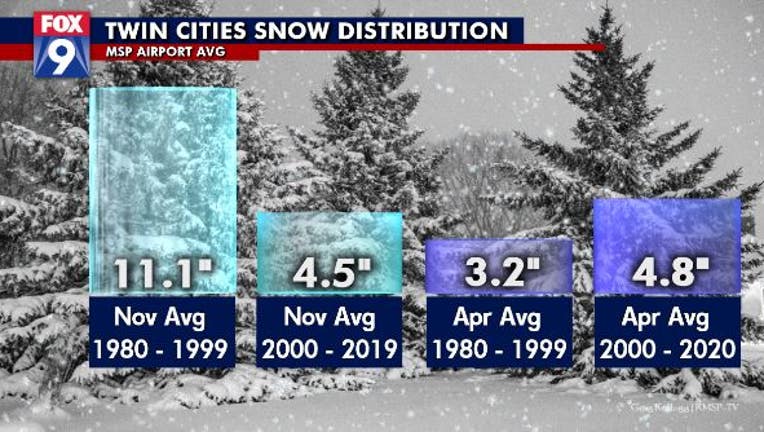 The average snowfall received at MSP Airport over a roughly 20 year time span, comparing the late 20th century averages with the early 21st century averages for both the start and end to our snow season. November experiences a large dip in snowfall w

After one of the driest stretches to potentially round out a snow season on record in the Twin Cities, it finally happened; it snowed. A lot. It was actually one of the larger storms of the entire season recording 6.6” of fluff at MSP Airport. Because of this storm, and another inch or so in the following couple of days, we have now seen over 50” on the season and will be roughly 2 inches within average. But our snow also means that we have now seen a third consecutive April with above average snowfall. While not groundbreaking information itself, this may spell a much larger change in our overall snowfall distribution here in Minnesota.

Our climate normals, from 1981-2010 show that the snowiest months on average are December and January, followed by March, November, February, and lastly April and October. But over the last 20 years, we’ve really seen this change. January and November have seen a significant reduction in yearly snowfall. But December, February, and April have seen big gains in snow. This may show that our overall snow season is just getting pushed back by a few weeks.

Take the beginning and end of the season for example. In the 80s and 90s, November was a BIG snow month. The Halloween Blizzard aside, there were several HUGE years for snow in the Twin Cities during the month. Even without that fateful November, we averaged more than 9 inches of snow. November 1991 included, we averaged over 11 inches of snow. But since the early 90s, the month of November has continued to get warmer and much drier, now averaging less than half of the typical snowfall it used to. 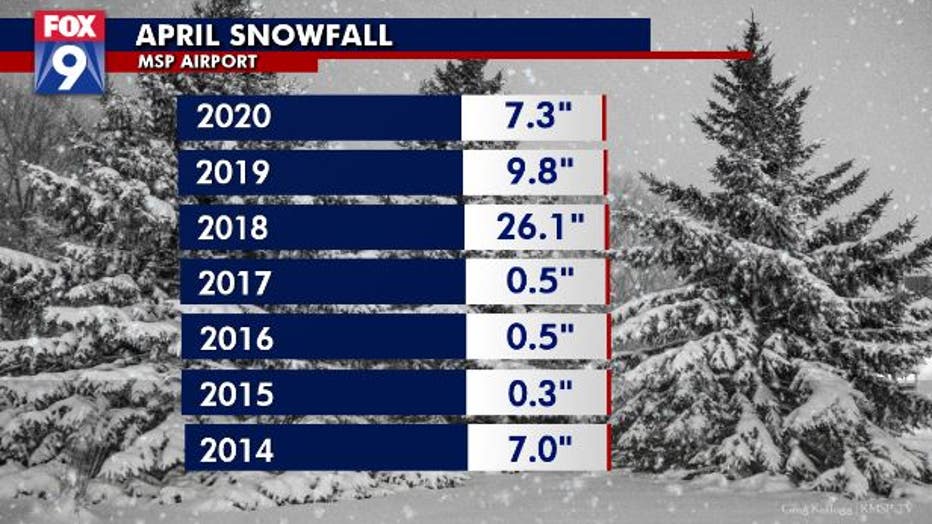 But our overall season totals haven’t been getting lower. In fact, if anything, our yearly average snowfall has been increasing at a slow rate. So if our November is significantly drier, then our snows have to be coming at different times of the year. The months of December, February, and especially April, have seen a drastic uptick in snow over the last couple of decades… and now April is starting to become the new November. What I mean by this is that both months aren’t viewed as “typical” snow months. While both can get snow, we’ve certainly proven that, they aren’t often seen by the general population as big snow makers. And while that may ring true for November now, it certainly doesn’t for April. The average April now sees nearly 2 inches more snow than it did just 20 years ago. Doesn’t sound like much, but this could just be the beginning of a much longer and snowy stretch of Aprils in the years ahead. 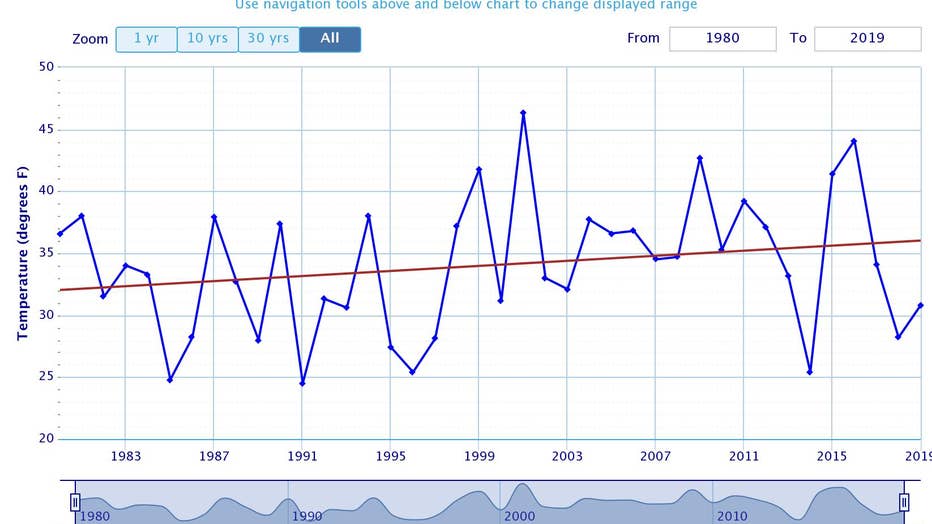 Here are the average monthly temperatures for November dating back to 1980. Notice the general trend is warming over the last 40 years by a solid 5 degrees overall, showing that our fall season has been warming signficantly over the years.

It’s unlikely though that April gets as snowy as November was in the 80s and 90s because the month as a whole is MUCH warmer than November, and temperatures are far more representative of October. So how do we see so much snow in April and not October? Well, it’s likely due to the amount of cold air still stored in Canada from the winter season. While temperatures are climbing, it’s much “easier” to find cold air in the spring than it is in the fall because the cold air is already established from the long winter season. "Developing" this cold air takes time, and is usually not well entrentched even in Canada in the mid fall month. 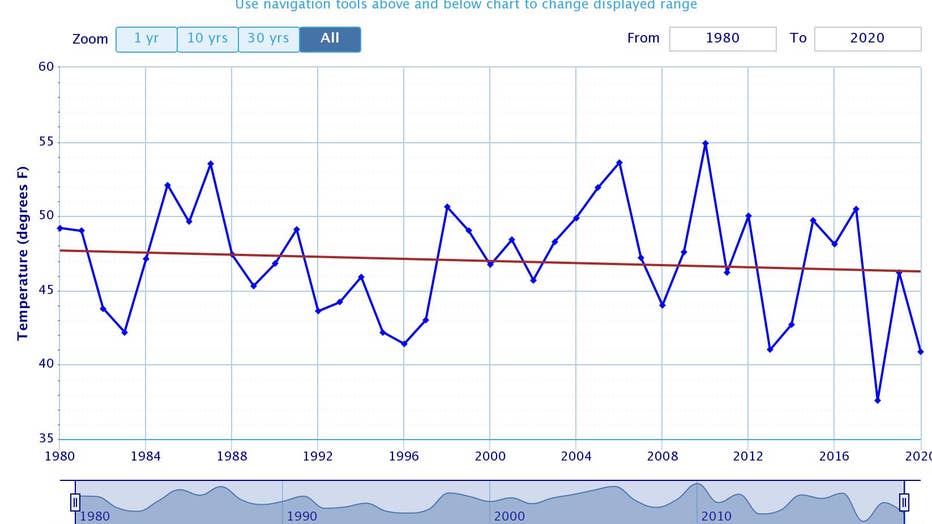 The monthly average temperature for April has been declining overall since 1980, with a pretty significant dip over the last few years. We have dipped roughly 3 degrees overall in the last 4 decades. But do notice that the average temperatures are no

So why the big change? Well, your guess is as good as mine. The most likely scenario is just variability over time. The atmosphere has long and short trends for everything from temperature to precipitation to wind speeds and hurricanes. So one of those trends just might be to hang onto snow and cold longer in the spring, but keep the mild and dry weather around longer in the fall. Either way, all technological measurements show a general warming trend across the globe even though much of the Upper Midwest has bucked that trend over the last decade or so with many locations showing a pretty flat trend since 2012.