(FOX 9) - Have you seen a few flakes over the last couple of days? Well, those flakes may actually have been caused by man instead of nature. Let me explain.

It's no secret that it’s been quite some time since we’ve seen the sun--six straight days to be exact. Those clouds are obviously just moisture in the atmosphere that we can see, known as condensation. Condensation forms as liquid water in our atmosphere--yes, even when temperatures are well below freezing. Rain forms from those clouds to state the obvious. But what may be less obvious is that you need 3 variables to get it to rain; moisture, lift, and condensation nuclei. Water droplets can’t start forming without something for the water to adhere to… AKA the condensation nuclei. This can be anything microscopic from pollution to soot to salt to dust, anything floating in our atmosphere the water can attach itself to.

It’s the cold season though which means we get plenty of snow instead of rain. But, the formation of snowflakes adds one additional complication. Temperatures have to be JUST right. While tiny “snow pellets” (tiny snow balls that more resemble dip n dots than they do snowflakes, and usually fall when temperatures are well below zero) can form at just about any temperature below freezing, a more traditional snowflake can only form when temperatures are between -10 degrees C and -20 degrees C… or roughly 14 degrees F to -4 degrees F. Well, if we have lift, moisture, condensation nuclei AND temperatures in that part of the atmosphere are between -10 degrees C and -20 degrees C, then snowflakes can form.

So how do we know what the air is like above our heads? Well, we send up weather balloons twice a day, once in the morning and once in the evening, to get a sample of the atmosphere all the way to the top. The following graph is the result of these weather balloon launches. This one is specifically for Tuesday morning. 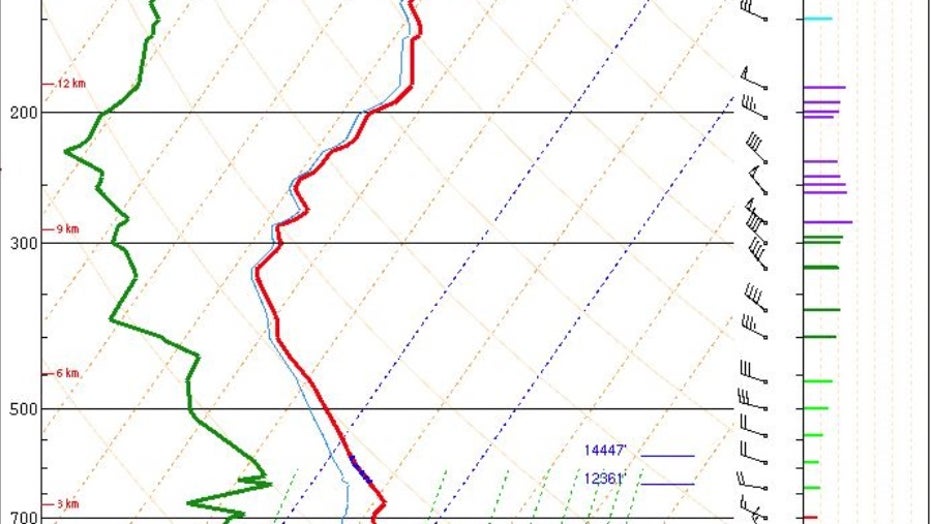 Temperature & moisture profile of the atmosphere from the ground at the bottom of the image, to the tropopause at the top of the image. Both the red and green lines, representing temperature and moisture, meet just above ground level in a small p

Well, the atmosphere has seen a very similar profile to the one above over the last couple of days. However, the problem is we likely haven’t seen enough lift and/or condensation nuclei around to get snowflakes to form, which is why we haven’t seen any widespread snow like we did last week. Well, even though we haven’t seen widespread snow, some scattered flakes have been falling and it’s likely because of humans. Warmer man-made objects are actually forcing some isolated areas of lift in our condensation layer that’s likely forcing snowflakes to form and fall to the ground. Areas around Minneapolis-St. Paul International Airport have likely experienced this. Check out the radar loop from early Tuesday morning:

The circled area shows some very light flurries forming just east and southeast of the airport. The reason? Well, that is the path of landing aircraft. Commercial aircraft descend through the layer of the atmosphere that can house snowflakes, create additional condensation nuclei and turbulence that creates enough lift to force snowflakes to form. Then, those flakes fall to ground as flurries.

A very similar phenomena can likely be found near large heat source like cooling towers from power plants. These towers subject the local areas to higher moisture levels and a direct heat source which can actually force air to lift up and over the plant within a couple thousand feet of the ground and create localized snowflakes.  Pretty neat, huh?

These type of events are pretty rare and are even more unlikely to see enough snow to accumulate. That said, if you happen to see a few flakes on your car or your sidewalk, this may be the reason.