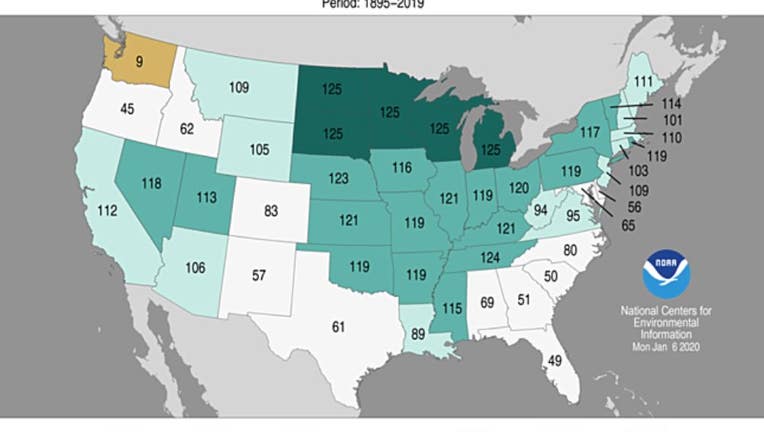 Amount of precipitation in 2019 when compared to other years since records began 125 years ago.

Wet weather was so last year! Now that 2019 is behind us, hopefully the extremely wet weather is too. Several official climate sites statewide finished the year with well above average precipitation. More than 43” of liquid fell in the Twin Cities last year, coming in nearly 3” above what is now 2nd place. Places like Rochester though had more than 55” of liquid precipitation, nearly a FOOT above their previous wettest year, which was 1990. Areas of northern Minnesota though were much drier, with even a patch of land east of Bemidji coming in with moisture below average on the year. But for Minnesota as a whole, we had more precipitation in 2019 than any year previous, with record dating back 125 years.

We weren’t the only one either with many of our neighbors, including the Dakotas, Wisconsin, and Michigan also having their wettest years. More than a dozen other central US states had their top 10 wettest year with the water-logged conditions extending all the way into parts of New England.

All of our moisture has actually pushed Lake Superior to one of its highest levels this century. The lake is up 15” and continuing to rise. That may not sound like much, but if you took all of that water and filled the area inside our 694/494 loop, we would have a lake 122 feet deep!