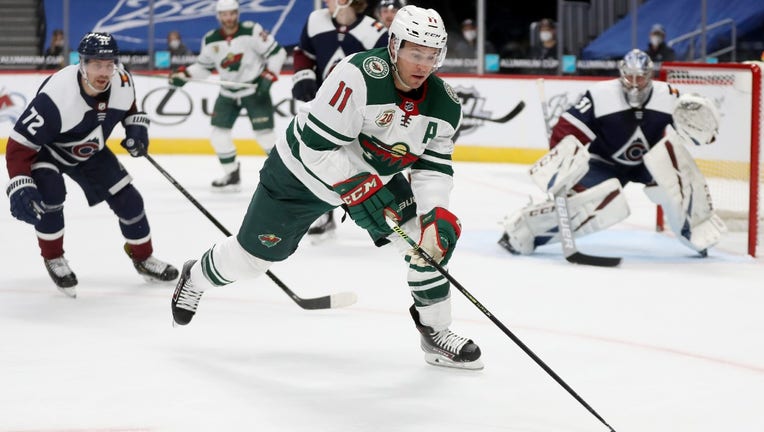 Zach Parise #11 of the Minnesota Wild looks for an opening against the Colorado Avalanche in the first period at Ball Arena on February 24, 2021 in Denver, Colorado. ((Photo by Matthew Stockman/Getty Images))

MINNEAPOLIS - For the first time in his nine years with the Minnesota Wild, Zach Parise is a healthy scratch against the Las Vegas Golden Knights Wednesday night.

It’s just the second time in his 16-year NHL career that Parise has been a healthy scratch. Parise was on the ice for the last 1:33 of Minnesota’s 5-4 overtime loss against the Golden Knights Monday night. Las Vegas rallied from a 4-2 deficit in the third period to beat the Wild 5-4 in overtime. Parise turned a puck over late in regulation on a clearing attempt, and the Golden Knights tied the game with 42 seconds to play on a goal from former Wild player Alex Tuch.

Parise explained the situation on Wednesday.

"It was disappointing and I don’t agree with the decision. In my heart, I felt like I was doing the right thing. I asked Marcus (Foligno) after the second, ‘Have you ever had a hat trick?’ He had two goals to that point and he said no, so I said ‘Alright, let’s go get you one.’ I said to him if I get the puck, get up ice with me and I’m not going to shoot, I’m going to find you. I stayed out there and I guess it was the ultimate backfire. I know in my heart I had the best of intentions to help Marcus. I talked to the team about it yesterday, and they are 100 percent behind me and have my back, and that’s what matters," Parise said.

The overtime loss snapped a six-game win streak for the Wild. Coach Dean Evason confirmed after the team’s pregame skate that Parise won’t play Wednesday night, but is not hurt or sick.

"Not going to get into details, but we as an organization and staff make a decision each night and we've made the decision to go with the lineup that we're going with. It's a group decision, and Zach's out here tonight," Evason said. "You hope you go forward when something like this happens and hope you can turn it into a positive."

In 19 games this season, Parise has three goals and six assists. His nine points are tied for seventh on the team. Parise recently recorded his 800th career point.