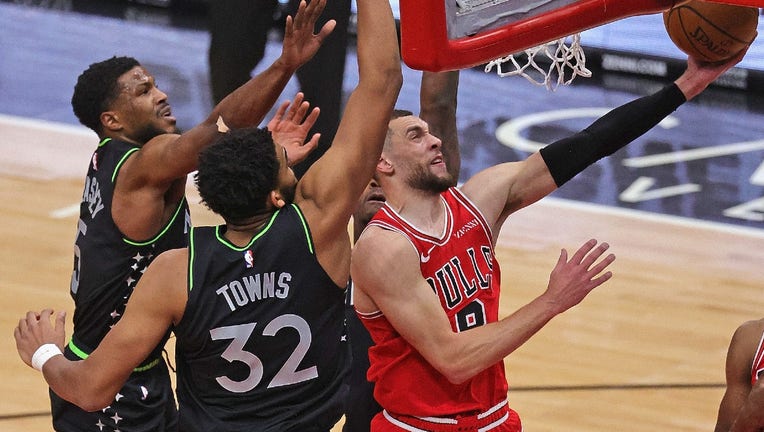 Zach LaVine #8 of the Chicago Bulls drives to the basket past Malik Beasley #5 and Karl-Anthony Towns #32 of the Minnesota Timberwolves at the United Center on February 24, 2021 in Chicago, Illinois. ((Photo by Jonathan Daniel/Getty Images))

MINNEAPOLIS - The Minnesota Timberwolves are 0-2 in the Chris Finch era after a 133-126 in overtime to the Chicago Bulls Wednesday night, and a former Wolves’ draft pick had a lot to do with it.

Zach LaVine, a former first-round draft pick for Minnesota, scored a game-high 35 points, shooting 14-of-21 from the field and 5-of-8 from three-point range. LaVine was recently named an All-Star, and the Timberwolves could see his potential before a torn ACL ended his 2018 season. At the time, he was averaging 18.9 points and 3.4 rebounds per game for the Wolves.

LaVine was then traded to the Bulls in the deal that brought Jimmy Butler to Minnesota to play for Tom Thibodeau. Butler is now with the Miami Heat, Thibodeau was eventually fired and replaced by Ryan Saunders, who was dismissed last Sunday night.

LaVine had a chance to win it for the Bulls in regulation, but his three-point attempt rimmed out. Karl-Anthony Towns could only sit and watch from the bench, after fouling out with 12 seconds left in regulation. Towns finished with 24 points, eight rebounds and five assists. Malik Beasley led Minnesota with 25 points, and Anthony Edwards added 21.