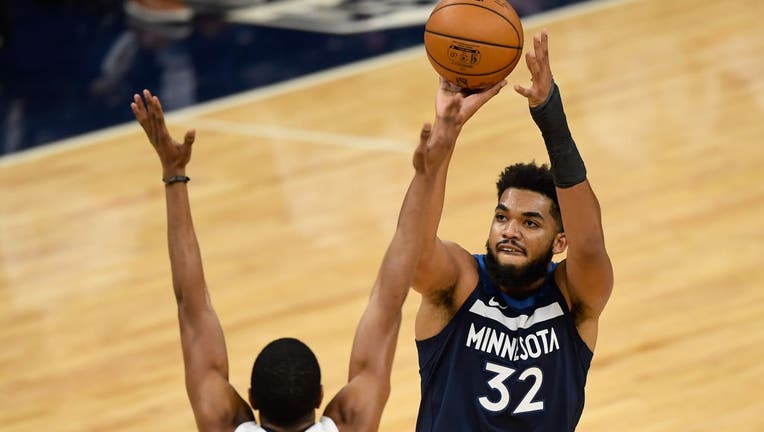 MINNEAPOLIS, MINNESOTA - JANUARY 13: Karl-Anthony Towns #32 of the Minnesota Timberwolves shoots the ball against the Memphis Grizzlies during the second quarter of the game at Target Center on January 13, 2021 in Minneapolis, Minnesota. (Photo by Ha ((Photo by Hannah Foslien/Getty Images) / Getty Images)

MINNEAPOLIS - The Minnesota Timberwolves are scheduled to face the Orlando Magic Wednesday night at Target Center, and they’ll again be short-handed due to health and safety protocols with COVID-19.

Team officials said Tuesday forward Karl-Anthony Towns, guard Ricky Rubio and forward Juancho Hernangomez will not play against the Magic. Hernangomez remains in isolation, and Towns announced on social media last Friday he’s tested positive for COVID-19. Towns lost his mother to the virus last April, and has lost as many as six relatives since.

Timberwolves coach Ryan Saunders didn’t have many updates when it came to all three players on Tuesday.

"Every conversation I’ve had has been positive with these guys. Everybody is at a different place on what they’re doing," Saunders said.

The Timberwolves are 1-7 without Towns in the lineup, and are 1-9 in their last 10 games since a 2-0 start. They did multiple rounds of COVID-19 testing before losing to the Atlanta Hawks 108-97 on Martin Luther King Day, despite forcing the Hawks to commit 26 turnovers. Without Towns and Hernangomez, Jarred Vanderbilt and Naz Reid combined for 17 points and 10 rebounds in that loss.

D’Angelo Russell scored 31 points in the loss, and said Tuesday it comes down to a young team sticking together.

"You’re not realizing how close we are when the result is loss, loss, loss. You’ve got to keep everybody’s energy and character right first, and I think that kind of falls into play when things start going well. We’ve just got to keep chipping away at it, I don’t think we should be too low on ourselves right now," Russell said.

Towns also missed seven games earlier this season after dislocating his left wrist, and the Wolves went 0-7 in that stretch. Since the trade that brought Russell to Minnesota, he and Towns have played four games together.