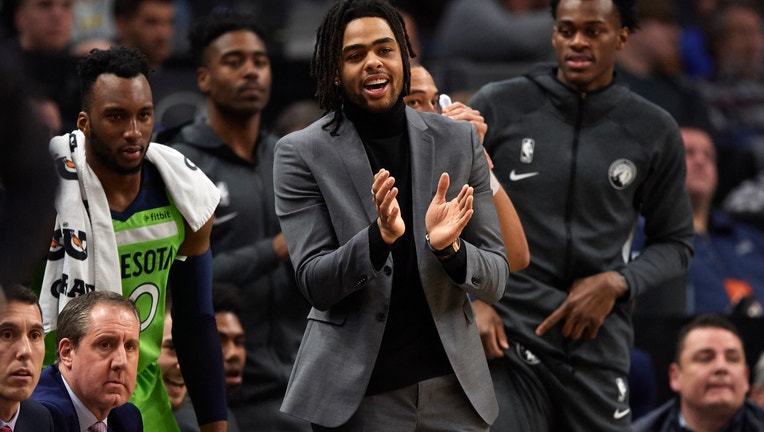 D'Angelo Russell #0 of the Minnesota Timberwolves cheers on the team from the bench during the first half of the game against the Los Angeles Clippers at Target Center on February 8, 2020 in Minneapolis, Minnesota. ( Hannah Foslien )

MINNEAPOLIS (FOX 9) - The NBA has issued a fine against the Minnesota Timberwolves for sitting guard D'Angelo Russell during a game this week against the Nuggets.

The Wolves were fined $25,000 for a violation of the league's resting policy.

Russell didn't play as the team suited up on the road in Denver on Sunday, in a game they ended up losing 128 to 116. The NBA says they determined Russell was a healthy player using the league's guidelines.

In a statement, the Wolves said they chose to bench Russell, who had joined the team following a trade earlier in February, to prepare him for a "difficult stretch of games" and due to the fact he was new to the team's system.

"While we respect the league's guidelines and standards, we are a player-centric organization that's focused on learning and optimizing our players' bodies," team officials wrote.

The resting policy was passed two years ago as a response to more teams, most notably the Golden State Warriors and San Antonio Spurs, using strategic rest, often referred to as "load management," to keep players healthy through the long 82-game season as well as the playoffs. However, the new trend resulted in some stars missing nationally televised games.

Teams can be fined up to $100,000 when players don't suit up for games that they are otherwise able to play. Obviously, teams can rest players facing injury injury concerns.