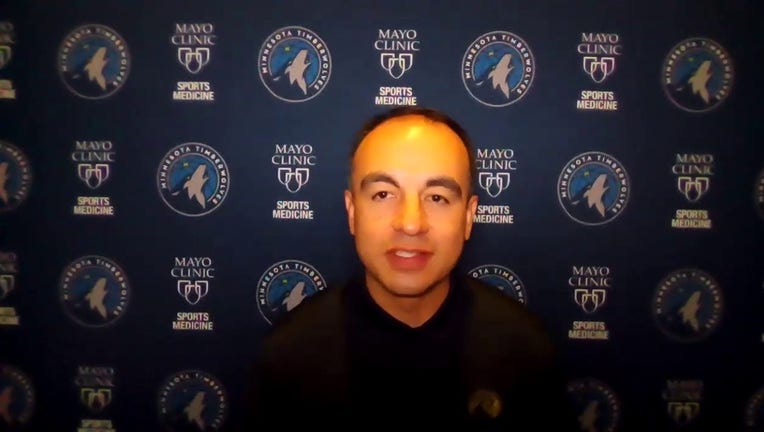 Timberwolves front office head Gersson Rosas talked Tuesday about hosting pre-draft workouts later this week despite Minnesota not currently having any picks in the NBA Draft.

MINNEAPOLIS - Gersson Rosas and the Minnesota Timberwolves are in an interesting spot as the Utah Jazz, other NBA league officials and draft prospects come to Minneapolis this week.

The Wolves currently don’t have any selections in the 2021 NBA Draft, set for July 29. That’s after they landed the No. 7 pick in the draft lottery, and since their selection was only protected if it was a top-three pick, it goes to the Golden State Warriors as part of the deal that sent Andrew Wiggins west and brought D’Angelo Russell to Minnesota.

That said, anything can happen in the next three weeks. That’s why Rosas and the Timberwolves are hosting in-market pre-draft workouts starting Thursday.

"Just because we don’t have a pick on whatever day today is doesn’t mean we’re not going to have a pick on draft night. The worst thing you can do is be caught unprepared," Rosas said Tuesday morning. "It doesn’t necessarily mean we want to do it, we believe in our core and our group, and we want to see that moving forward. But I’m not doing my job if I’m not being diligent, preparing for decisions for draft night and if opportunities present themselves. You have to be educated to make those decisions, and that’s what this process is about."

Rosas is looking for stability and consistency, while still trying to improve his roster after the 2020-21 season was full of change. Ryan Saunders was fired after a 7-24 start, and Chris Finch went 16-25 over the final 41 games.

It’s clear, at least for now, that the future for the Timberwolves centers around Karl-Anthony Towns, Russell, Anthony Edwards and possibly Malik Beasley. Rosas also made it clear he’ll be talking with teams over the next few weeks, as has happened since the NBA Combine, to see who is available and at what cost. Also, there still remains a chance they could be involved in NBA Draft night.

With Minnesota not being a hot bed for free agency, and without a draft pick currently, the only way the Timberwolves can change the roster as it stands now is via trade.

"This does create an environment over the next three or four days where you can speak with teams, address a need, address some targets. Some of those conversations have already been started from Chicago at the Combine. For us as we move forward, this team is going to primarily get better through trades and through development," Rosas said.

One hot name potentially on the trade market? Philadelphia 76ers guard Ben Simmons. Rosas and the Timberwolves are also looking for a power forward to pair with Towns.

The Timberwolves are looking to build off a strong finish to last season. It remains to be seen if that happens with the current roster, or if Rosas does more dealing later this month.