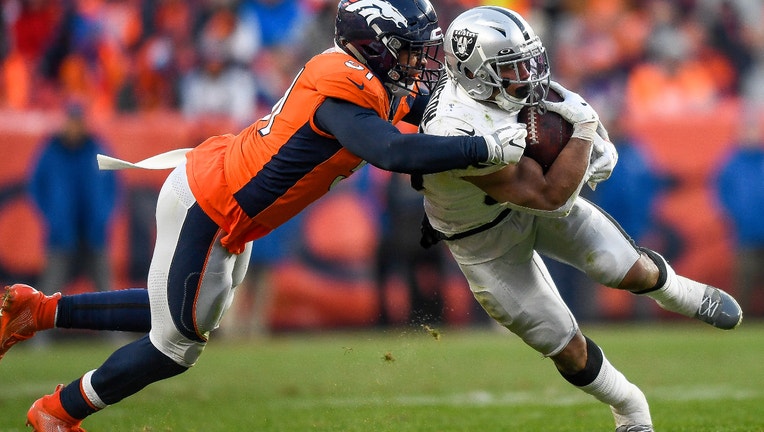 DeAndre Washington #33 of the Oakland Raiders is tackled by Todd Davis #51 of the Denver Broncos during a game at Empower Field at Mile High on December 29, 2019 in Denver, Colorado. ((Photo by Dustin Bradford/Getty Images))

MINNEAPOLIS - Needing depth at linebacker with Anthony Barr out for the season, the Minnesota Vikings reportedly signed Todd Davis to a one-year deal on Thursday.

Davis comes to the Vikings after being a full-time starter for the last four seasons with the Denver Broncos, and played for current offensive coordinator Gary Kubiak. Davis led the Broncos last year with 134 tackles, including six tackles for a loss.

Two seasons ago, he led Denver with 114 tackles, had six tackles for a loss, one interception and seven passes defended. Davis made 63 career starts for the Broncos.

The Vikings placed Barr on injured reserve earlier this week with a torn pectoral muscle. Barr played 16 defensive snaps before being hurt on a play trying to tackle Jonathan Taylor. Zimmer said Wednesday he’s expected to miss the season.

In his absence, Eric Kendricks and Eric Wilson will share play-calling duties on defense. Wilson made eight tackles, including one for a loss, in last Sunday’s loss to the Colts.

"It’s never easy replacing a guy like Anthony Barr. He does so many good things for us on defense. He’s a great football player, he’s really smart and intelligent. We’re going to have to do some things a little bit differently than we would if he was in there," Co-defensive coordinator Adam Zimmer said Thursday. "I’m really comfortable and confident with Eric Wilson playing a much larger role for us. I think he’s done a great job for us when he’s gotten a chance to play. I’m confident he can step in and help us win."