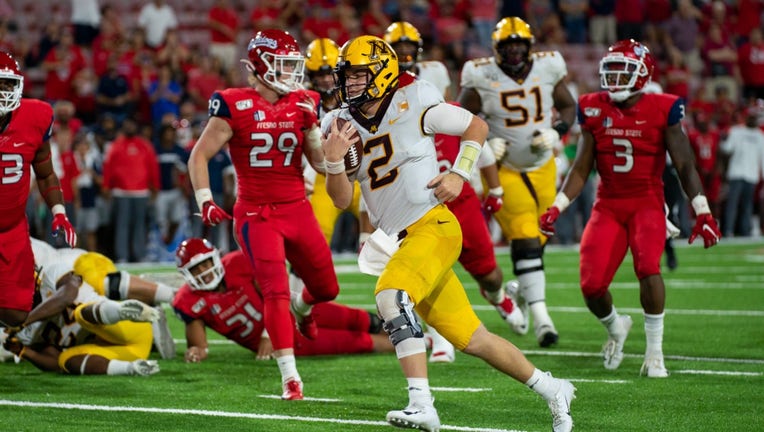 MINNEAPOLIS - PJ Fleck harps on his Gophers football team winning “The 78 percent” to win football games. For the first time in Fleck’s tenure in Minnesota, they didn’t win the 78 percent at Fresno State last Saturday, and still beat the Bulldogs 38-35 in double overtime.

That statistic includes winning the turnover margin, missed tackles and making more explosive plays than the opponent. If not for two very big plays, the Gophers would’ve been flying back to Minnesota after a loss early Sunday morning. In fact at one point late in the fourth quarter, the Bulldogs were at 94 percent odds to win the game.

Minnesota has Tanner Morgan, Chris Autman-Bell and Antoine Winfield Jr. to thank for turning the tide in the Gophers' favor. Despite all adversity they largely inflicted on themselves at Fresno State, they’re 2-0 because they kept fighting.

"Mohamed (Ibrahim) fumbled, the quarterback fumbled, we dropped a snap, we had the personal foul, we had the muffed punt, we had a hold on a third-and-8 we convert. Three penalties on third downs where we were off the field. Inopportune times to have penalties that set us back. With all that said, our players found a way to win," Fleck said. “You see the mental fortitude, you see the courage, you see the character of your team when games don’t go exactly to plan."

Winfield sealed the win with an interception in the end zone in double overtime, but it wouldn’t have gotten to that stage without Morgan and Autman-Bell. Morgan, who was sacked four times and fumbled three times Saturday night, had the stage with the offense in the final five minutes down 28-21.

After hitting Rashod Bateman on a critical 3rd-and-18 play for a first down, the Gophers eventually faced a 4th-and-13 at the Fresno State 20-yard line. The game was on the line, and Morgan had to look for another option with Tyler Johnson and Bateman blanketed.

Enter Autman-Bell, who made a leaping grab in the back corner of the end zone and got his left foot just inside the pylon for the touchdown. Tie game, the Gophers forced overtime.

It was Autman-Bell’s first touchdown as a Gopher, and couldn’t have come in a more clutch situation. Morgan said the offense never doubted from the moment they took the field for the drive that it would end in a touchdown.

“All I did was just give him a chance to make a play, and Chris made an elite play,” Morgan said.

Then, Winfield got his chance to be the hero against the Bulldogs for the second straight season. Last year, he made a leaping interception as Fresno State was driving for what would’ve been the game-tying touchdown.

Saturday night’s play was equally as impressive. Jorge Reyna appeared to have a tight end wide open on the play. Winfield said the Gophers were in Cover 2, and he was in coverage on a post pattern that Jordan Howden picked up. That allowed Winfield to freelance, so he speed-turned, high-pointed the football and made the game-winning play.

“I don’t think Antoine Winfield Jr. is ever going to be allowed in the state of California or near Fresno ever again,” Fleck said.

Winfield Jr., who carries the nickname “Lil Tweeze” made by his father, was named the Big Ten Defensive Player of the Week on Monday for the play.

“It was just instinct. I kind of seen in the corner of my eye, I seen the receiver screaming down the field so I just knew that the ball was going there. That’s just when I got over there as fast as I could,” Winfield said.

He let his instincts take over, and they come from family bloodlines. His father, Antoine Winfield, played 14 seasons in the NFL as a defensive back. The two talked immediately after the win via Facetime.

Morgan can sympathize with Reyna. Winfield made life difficult for the Gophers’ quarterback in fall camp.

“As soon as the ball is put in the air and you see ‘Tweeze’ break back on the ball, I think everybody on the sideline knew what was going to happen. He was going to make a play,” Morgan said. “Second year in a row against Fresno he comes up big for us. That’s what he does, he’s a playmaker and he made an elite play at a critical time.”

Those big plays have the Gophers 2-0 going into their final non-conference game against Georgia Southern Saturday afternoon at TCF Bank Stadium.