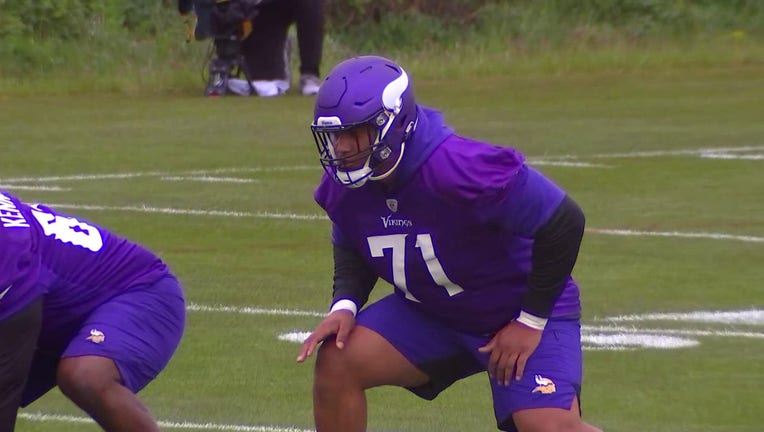 MINNEAPOLIS - After a month of training camp and three preseason games, it’s now game week for the Minnesota Vikings.

Not only are the Vikings preparing for the first game of 2021 that actually matters, they’re preparing to go on the road in front of a capacity crowd at Cincinnati in what should be a hostile environment. After a year without fans, the Vikings got a taste of what that will feel like again in their final preseason game at Kansas City.

Vikings players and coaches react on Wednesday after tight end Irv Smith Jr. has been placed on the injured reserve, ending his 2021 season before it could begin.

One of the big storylines as the Vikings prepare to face the Bengals: Will the offensive line be fully healthy and ready to go? The short answer is they’re not fully healthy, and we’ll find out Sunday afternoon if the pieces that are healthy are ready to play.

The biggest concern for Mike Zimmer and the team is first round draft pick Christian Darrisaw. He was drafted with the intention to start Week 1 at left tackle, then he hit a couple of snags with a core/groin injury. Darrisaw has had two offseason surgeries, was limited both at organized team activities and at mandatory minicamp.

He left during training camp to get a second surgery done, and spent most days of camp at TCO Performance Center standing with a cap on and watching his offensive line teammates go through individual drills and team situations. Most concerning is that Darrisaw did not play in any of the Vikings’ three preseason games.

What does Zimmer need to see out of his rookie? He’d like to start with getting him on the practice field. The hope is that happens as early as Wednesday.

"That’s a good question as far as where he’s at. I think he’s practiced four times since he’s been here, so it’s an unknown. I’ve got to see him practice first, that would be the first step," Zimmer told reporters on Monday. "He’s not in terrific football shape because he hasn’t practiced, so we’ve got to see that too. There’s a lot of things that we have not seen him do."

The pleasant surprise of training camp was Oli Udoh, who is in line to start at right guard on Sunday. The 2019 sixth round pick will be making his first career start after taking many of the first-team reps during camp.

When the Vikings’ offense takes the field for the first time on Sunday, the offensive line will likely feature Rashod Hill at left tackle, Ezra Cleveland at left guard, Garrett Bradbury at center, Udoh at right guard and veteran Brian O’Neill at right tackle. Wyatt Davis, Blake Brandel and Mason Cole could mix in, but the reality is the line depth gets thin if somebody gets hurt.

Complicating matters is Irv Smith Jr. being out for the season after having meniscus surgery. He had made strides in run blocking, a role that’s now left to be filed by Tyler Conklin, who will start Sunday in Smith’s absence. The Vikings also traded for Chris Herndon to get some depth at the tight end position.

If the Vikings’ offensive line can stay healthy and play even average, it should allow the offense to have plenty of changes for big plays between Dalvin Cook, Justin Jefferson and Adam Thielen. Cook finished second in the NFL in rushing last year, and Jefferson and Thielen combined for 21 touchdowns.

It seems like it’s not football season until we have questions about the offensive line. We’ll find out where the Vikings are at on Sunday.