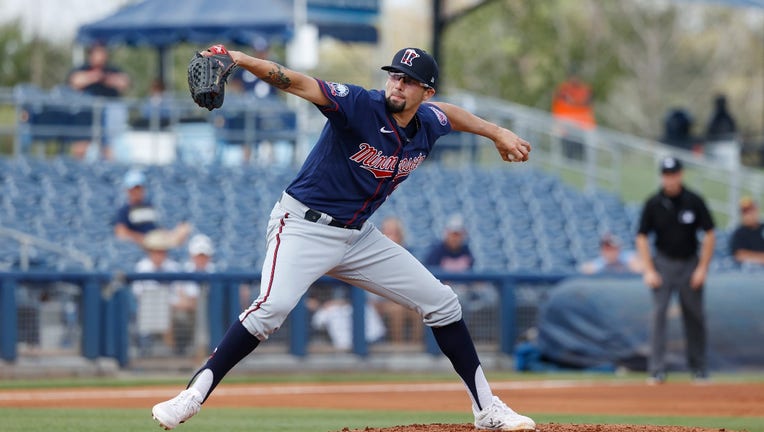 Devin Smeltzer #31 of the Minnesota Twins pitches during a Grapefruit League spring training game against the Tampa Bay Rays at Charlotte Sports Park on February 26, 2020 in Port Charlotte, Florida. The Twins defeated the Rays 10-8. ((Photo by Joe Robbins/Getty Images))

If you look up Devin Smeltzer’s slider use in 2019, you’ll find that Statcast says he threw 30 sliders last year.

He recorded no swinging strikes.

This was a problem.

Smeltzer has a unique set of skills that combats his lack of velocity. His fastball rarely cracks 90 which puts him in the 6th percentile for velo among MLB pitchers.

The lefty, however, can seriously spin it.

His fastball comes in at a 2,400 rpm. The curveball twirls up to the plate at 2,700 rpm. He can also kill the spin on his changeup to get an above average amount of vertical drop.

The slider? It was a nothing pitch. The ugly duckling to his three other quality offerings.

It backed up a lot, hanging for a moment in the zone, or it would dive well beyond the strike zone, leaving hitters to just watch it skip in the dirt.

While Smeltzer’s three-pitch mix worked for him in 2019, having a legitimate slider could be a massive leap forward. The Twins’ pitching analysts like Josh Kalk have long known the benefits of having a slider. Thrown properly, it looks like a fastball longer before darting.

In 2008 Kalk wrote about what makes sliders so effective.

“[B]ecause curves tend to produce a larger hump, a fast-reacting hitter has slightly more time in which to put on the brakes (or alter his swing) when he realizes that the pitch is not a fastball,” Kalk wrote. “Because sliders tend to stay hidden much further down the line, a batter who is fooled in the information-gathering stage has much less time to recover.”

Over 10 years ago, long before “tunneling” had even entered the standard baseball lexicon, Kalk had discovered that curveballs can pop out of the pitcher’s tunnel to give hitters a hint that something is up. This is one reason why the team has encouraged some pitchers to develop a slider.

Trevor May to transition to a new slider in 2019 after he played around with a new grip that resulted in better tunneling and more movement. Tyler Duffey also added velocity to his curveball and created a pitch that had more slider-like qualities. Taylor Rogers’ emergence as a late innings force is likewise due to embracing the slider mentality.

Curveballs are out, sliders are in.

In order to improve his slider, Smeltzer says he targeted three metrics on his Rapsodo: Spin rate, spin axis, and velocity.

“I knew what my spin, axis and velo on it needed to be,” Smeltzer says regarding his pitch design targets. “So if I had two of the three that wasn’t it. I had to keep tweaking it.”

He tinkered with different grips until he found the one that helped him attain those numbers consistently.

“It finally started to click and I really stuck with the grip, it’s pretty unconventional grip but through a lot of talks it just made sense from a physical standpoint of the ball’s got one direction of where to go with how I’m throwing it and it’s out. Again, I just throw it like a fastball and let the grip work.”

The unconventional part is that Smeltzer throws his slider off of a one finger grip. Standard sliders are typically thrown using both the index and middle finger applying pressure to the ball but Smeltzer discovered that the middle-finger dominant release was not working.

“In the past, I’ve gotten very middle finger dominant and it makes the pitch not as aggressive and it becomes loopy and very inconsistent because that finger, pressure-wise, isn’t a strength for that pitch for me,” Smeltzer explains.

Smeltzer continues his pitch design tutorial to the Zoom viewers.

“So with this grip here,” he says as he creates a “C” out of his index and thumb, “I’m pressing between these two and when I’m throwing it like a fastball and, because of physics, the ball can only come out this way when I’m coming through so it’s cutting through and kicking that gyro spin.”

What Smeltzer is saying is that he’s reducing that loopiness his former slider had. He said that he would often drop down to release that slider and get around the ball, tipping hitters off in the process. Now he can just rip it like he would his fastball and the grip does the work.

Why is this particular pitch important for his development?

Inconsistent and loopy results in hitters leaving the bat on the shoulder. The 24-year-old left-hander needed something with more action, a viable weapon -- particularly against lefties.

Smeltzer has pronounced reverse splits, demonstrating the ability to get right-handed hitters out at a much higher clip than left-handed ones. While his fastball and changeup combination performed well against righties, adding an aggressive slider to his mix would likely help him against those same-sided opponents, as well as keeping righties off-balance.

The Twins have created a cottage industry of getting pitchers to improve their slider offerings and see big gains. Devin Smeltzer might be the next on that list.