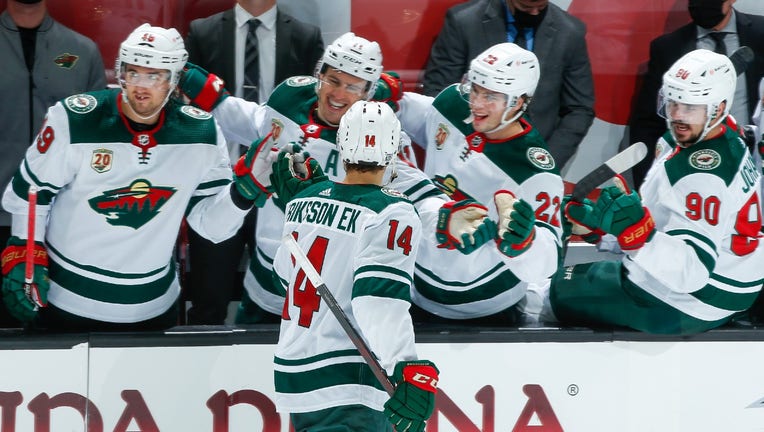 MINNEAPOLIS - The Minnesota Wild is on fire, and the franchise gets its biggest test of the season yet Monday night.

The Wild (12-6) is in Las Vegas to face the Golden Knights (12-4-1) in a battle of the top two teams in the Honda West. Since returning from a league-imposed pause due to COVID-19 issues, the Wild have won six of their last seven games and have the longest current win streak in the NHL.

They’ve scored 27 goals during their current win streak, extended after Matt Dumba scored with less than a second left in overtime Saturday night as the Wild beat the L.A. Kings. The Wild is one point behind the Golden Knights for the top spot in the West heading into Monday night’s clash.

"One game at a time. It’s exciting to see a team for the first time, let’s see where we’re as far as systematically and see where we’re at competing against them," Wild coach Dean Evason said Monday after the team’s morning skate.

Several players are putting their own stamp on the team’s recent surge. The NHL on Monday gave Mats Zuccarello its Third Star of the Week award.

Zuccarello was second in the NHL last week with eight points in four games, including a pair of goals. He had a goal and three assists in Minnesota’s 6-2 win over the San Jose Sharks. He had a goal and an assist in the Wild’s 6-2 win over the Colorado Avalanche, and had two assists in a pair of wins over the L.A. Kings, including the primary assist on Dumba’s overtime winner on Saturday.

He’s made a big impact since returning from off-season arm surgery.

The coaching staff is noticing his play on a team full of players putting up points. It could get overshadowed with Kirill Kaprizov leading the Wild with 17 points, or the play of Kaapo Kahkonen in net. But he has the attention of the coaches.

"Doesn’t get overshadowed by us. He’s been absolutely terrific in all areas. He’s competing away from the puck, he’s obviously making sound plays offensively," Evason said.

The Wild is in Vegas for a pair of games before heading to Arizona Friday and Saturday night. Minnesota then returns home for five straight games at Xcel Energy Center.