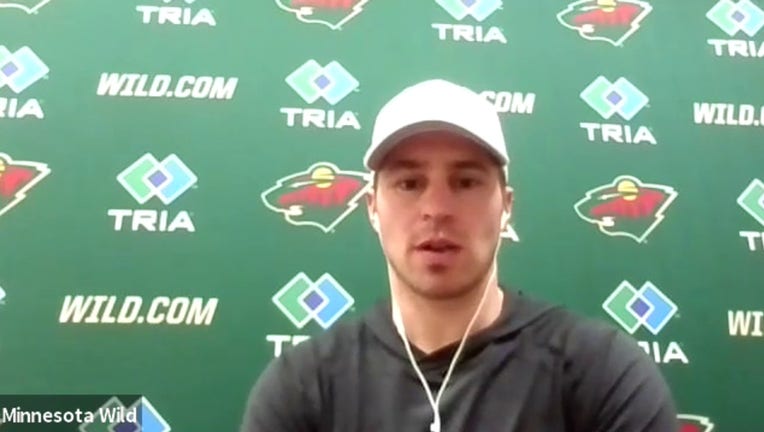 MINNEAPOLIS - The Minnesota Wild opened training camp Monday at TRIA Rink, and there was one noticeable name not on the ice when the afternoon session began.

Winger Kevin Fiala, who became one of the Wild’s top offensive players last season, did not participate in practice Monday. He actually tried to come on the ice about 35 minutes into the workout, but was quickly ushered away by coaches.

Wild coach Dean Evason said Fiala’s absence was "strictly precautionary," and he got time on the ice once the afternoon skate concluded. There are no injury concerns regarding Fiala, and reports indicate he needs to clear COVID-19 testing before he can practice.

The hope is it’s a minor hurdle as the Wild prepares to open a 56-game season, modified due to the COVID-19 pandemic, at the L.A. Kings on Jan. 14. They’re going to be flexible, because when you’re playing during a pandemic, that’s the only option. It means lines will get shuffled, and all different kinds of combinations will be used.

It'll be a season of following COVID-19 protocols, and a lot of late nights on the West Coast.

"We are going to have to be flexible, we’re going to have to pop people in and out of the lineup, we anticipate that. Hopefully we don’t have to do it on a regular basis, but with everything that’s going on, if we’ve learned anything it’s that nothing is going to be set in stone on a given day," Evason said.

One big task early on is to get Russian star prospect Kirill Kaprizov acclimated, both on the ice and in life in the Twin Cities.

Monday, he worked mostly on a line with veteran winger Zach Parise and center Nick Bjugstad.

The first practice was largely communication between Kaprizov and his teammates, led by Bjugstad and Parise. They helped navigate him through his first pratice, making sure he knew where to go and what to do. Kaprizov's English is still rough, so he more understands drills and situations on whiteboards than he does verbal instructions.

They have nine more days before the puck drops for a game and don’t have that luxury anymore.

"Nick and I were just making sure that he knew what we were doing out there. Trying to ease that transition for him. Make everything comfortable and I thought he did a good job. I thought he had a good first day of camp," Parise said. "I think you can definitely see his skill level. You can see he’s got a knack for scoring. He’s going to be an exciting player for us for a long time."

Parise joined the Wild in 2012 on a 13-year, $98 million contract along with Ryan Suter. The Wild on Sunday announced Jared Spurgeon, who signed a seven-year, $53 million deal this offseason, will replace Mikko Koivu as the team’s captain this season.

Parise said he was not approached by the team about being a captain, though he already is an alternate captain, along with Suter. He said Monday he’s happy for Spurgeon.

"I was happy for Jared. I think he’s a good choice, we all know what type of person he is. As a player you see it every day what he brings to us," Parise said. "Of course there was disappointment but it’s not about me, it’s about him and it’s an honor for him, that’s what’s most important."