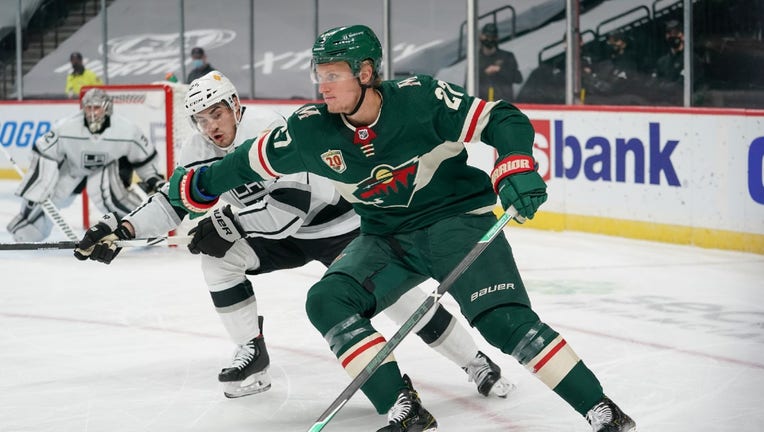 MINNEAPOLIS - The NHL announced Monday that Minnesota Wild center Nick Bjugstad has been fined the maximum of $5,000 for a cross check on Colorado’s Ryan Graves Sunday night.

The play happened about five minutes into the second period of the Wild’s 4-3 overtime win at Xcel Energy Center. The Wild got the win despite being without Kevin Fiala, who started a three-game suspension on Saturday after getting called for a five-minute major and a game misconduct for boarding against Matt Roy of the L.A. Kings last Thursday.

Fiala will miss Tuesday’s game at Colorado, then should return Thursday. Bjugstad was fined, but not suspended for the hit.

The Wild was also without Matt Dumba, Marcus Foligno and Marcus Johansson for Sunday’s comeback victory. Dumba was placed on injured reserve due to a lower body injury, Johansson’s issue is not clear and Foligno was placed on the NHL’s COVID-19 list, which means he either tested positive or came in close contact with a carrier. Foligno has three points in nine games this season, and leads the Wild with 25 hits.

With several players out, other stepped up for the Wild in Sunday’s win. Jordan Greenway’s second goal of the season tied the game 1-1 in the first period. Victor Rask scored twice, including the game-tying goal at the 12:34 mark at the third period, before Jonas Brodin won it for Minnesota 18 seconds into overtime. Greenway and Joel Eriksson Ek assisted on the game-winning goal.

The Wild improved to 3-0 in overtime games this season, and 6-4 with Sunday’s win. They also finished their first six-game home stand 3-3. Ten games into the season, they’re the No. 3 team in the Honda West with 12 points, one point behind Colorado and St. Louis.  The Wild now has two games against the Avalanche in Colorado, Tuesday and Thursday night.