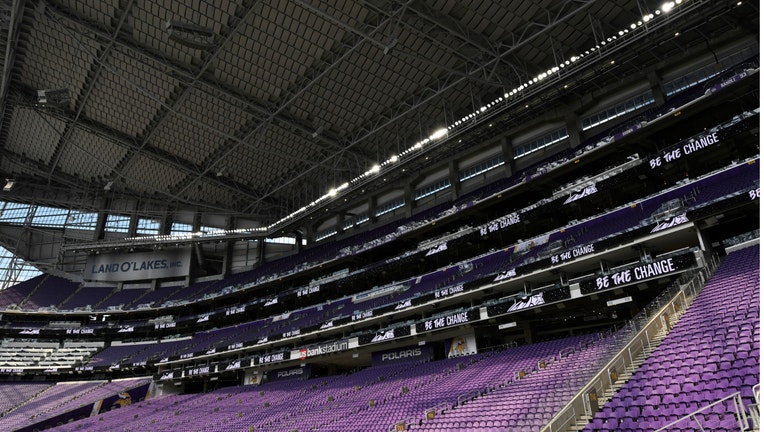 Be The Change is seen on the video board at U.S. Bank Stadium as players address the media regarding police violence and race inequalities during training camp on August 28, 2020 in Minneapolis, Minnesota. ((Photo by Hannah Foslien/Getty Images))

MINNEAPOLIS - Nobody really knows truly what to expect at noon Sunday, when the Minnesota Vikings host the Green Bay Packers at U.S. Bank Stadium.

A typical Sunday features hours of tailgating, a sold out crowd and 65,000-plus fans erupting with every big play. There’s nothing more Vikings football than the pre-kickoff Skol chant.

None of it will happen Sunday. Due to COVID-19 concerns, tailgate lots around U.S. Bank Stadium are closed, for the entire season and there won’t be a single fan in the stadium for at least the first two games. We don’t know yet about the rest of the season.

What will it look like? How will the atmosphere be? Will it be weird? Several Vikings were asked this week about what it will be like to play an NFL game without fans, something that probably never crossed their minds until six months ago.

Here’s a sample of the responses.

Safety Harrison Smith was asked about fake crowd noise, which was pumped in during a recent practice at U.S. Bank Stadium – “It was pretty quiet, it’s not going to be like the U.S. Bank we’re accustomed to realistically, and it’ll be a little strange. But I think once the game starts and you’re just focused on executing your job, I think it won’t really be that weird. The weirder aspect might be the pregame and the in-between plays that will be without a little crowd input. But I think it will be fine.”

Mike Zimmer has made it clear he thinks there’s a competitive disadvantage with no fans at U.S. Bank Stadium, while five other teams will have limited fans in attendance. He was asked about the home field advantage without fans – “Obviously U.S. Bank Stadium is a great venue for us as a home team. We’ve been really successful there and we’ve got great fans and the crowd noise and things like that will obviously be different. I kind of look at it like when we were at TCF and we weren’t playing on our home field, we were borrowing the University of Minnesota’s field and we had to go out and execute well. I don’t really believe that the energy or the juice will change. I think the players will still have plenty of that.”

Eric Kendricks says there’s no replicating Vikings fans with fake crowd noise. He said they have to get past it and make plays. – “It’s going to be hard to replace our fans at home obviously. Throughout the years since I’ve been here, we’ve done a fantastic job of getting rowdy. We’re not going to be able to replace that, it just is what it is. As far as playing with no fans, I feel like we’ve already kind of known that going into this season so we’ve mentally been preparing for that. We’ve got to still get ready to play the game, we’ve still got to get that energy ready, we’ve still got to be able to communicate and be effective when we’re out there. That’s what it’s all about.”

Kirk Cousins says it’s hard to imagine much of a home field advantage with an empty stadium. – “It’s tough without our fans, knowing how great of an environment it is at U.S. Bank in a normal setting. We’ll kind of see on Sunday what that’s like, we’ll get whatever home field advantage we can without fans, which is probably not much. I think fans make a difference and I think you feed off that energy. I think 75,000 people going crazy doing a Skol chant, I think that makes a difference.”

Minnesota native and wide receiver Adam Thielen took the positive route, saying playing football without fans is better than no football at all. – “It’s better than nothing, than a silent stadium. Obviously I wish we had the crowd and the crowd noise and all that, but at the end of the day that’s what we’re dealing with and we’ve got to make the most of it. We’ve got to figure it out, I think it was great to be able to get in there and do a scrimmage in the stadium just to kind of have an idea what the atmosphere will feel like, what it’ll feel like when you’re on the field and now that’s that new normal. It is what it is, you make the most of it and try to get yourself as prepared and ready as possible.”

Tight end Kyle Rudolph couldn’t help but think back to the first game at U.S. Bank Stadium, in 2016 against the Packers. He said the time and place don’t matter, it’s about winning. – “Great opportunity to go against them in the home opener this year, obviously it will be different with no fans in the stadium. I think back to the season-opener in 2016 against them and in that atmosphere, we won’t have that. But it’s something that Coach Zimmer preaches to us, and it couldn’t be more true this year, it doesn’t matter who we play or where we play, it’s how we play. If we go out and play well for four quarters, I think we’ll like the result.”

Garrett Bradbury was a rookie last year when he got his first taste of U.S. Bank Stadium on an NFL Sunday. He says he only notices fans pregame, when he’s on the sideline or when the defense faces a big third down. When he’s on the field, he’s locked into his assignment. – “It’s going to be different, obviously we love our fans. The Vikings fans are the best in the NFL. It’s a competitive advantage, but it’s interesting. Probably 95 percent of the year we play football without fans. We’re just going to be out there and doing our job. I think when you’re playing, you don’t notice it as much, but when you’re on the sideline, when you’re in pregame, at halftime, that’s kind of when you really notice it. It’s the moments when you’re not on the field is when you notice it the most. But when you’re on the field, you’re in the moment, you’re focused on your job.”

That job is to start a 2020 season that’s unlike any other 1-0 with a division win against one of your biggest rivals. The biggest difference this year will be a quiet stadium, and most of us watching from the comfort of our couches.