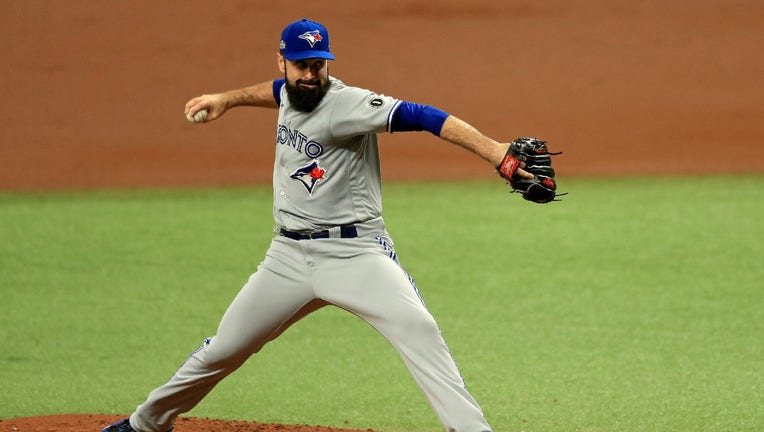 Matt Shoemaker #34 of the Toronto Blue Jays pitches during the Wild Card Round Game One against the Tampa Bay Rays at Tropicana Field on September 29, 2020 in St Petersburg, Florida. ((Photo by Mike Ehrmann/Getty Images))

MINNEAPOLIS - The Minnesota Twins have reportedly added depth to the starting pitching rotation, agreeing to terms with Matt Shoemaker on a 1-year, $2 million deal.

Shoemaker, 34, comes to the Twins and will likely compete for the final spot in the starting rotation. He’ll join a group that includes Jose Berrios, Kenta Maeda, Michael Pineda and J.A. Happ. The No. 5 spot in the rotation will likely come down to Shoemaker, and Randy Dobnak.

It’s a low-risk move for the Twins, as Shoemaker comes with a history of injuries. He spent his first six major league seasons with the Los Angeles Angels of Anaheim before spending the last two with the Toronto Blue Jays. He made just six starts last year in a 60-game season, finishing 0-1 with a 4.71 earned run average in 28 2/3 innings. He struck out 26 and walked nine.

But in the last five seasons, Shoemaker has dealt with injuries to his left knee, right arm, elbow and suffered from a blood vessel in his brain after getting hit by a line drive. After throwing 160 innings in 2016, he hasn’t thrown more than 77 in each of the past four years.

He finished second the American League Rookie of the Year voting in 2014. In a little more than 600 innings pitched, which includes 104 starts, Shoemaker has a 3.86 ERA, has 43 wins and 540 strikeouts.

The Twins are hoping Shoemaker not only can stay healthy, but provide a strong presence to the back end of the pitching rotation.