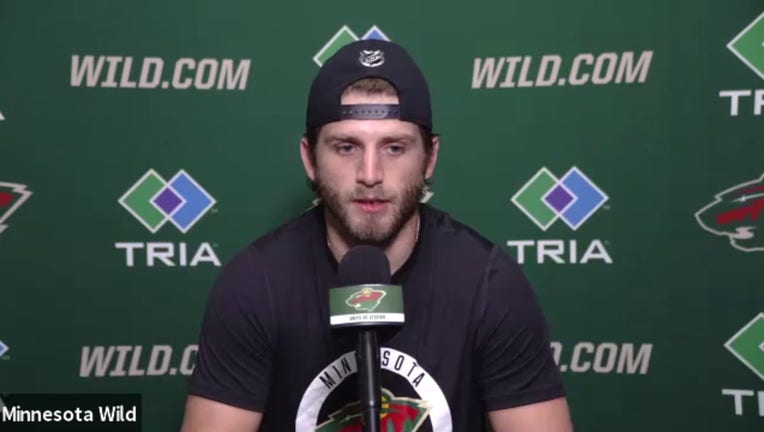 MINNEAPOLIS - Ryan Hartman senses that the Minnesota Wild is building something special with Bill Guerin taking over the front office, and Dean Evason now manning the bench.

The Wild is 16 points clear in third place in the Honda West, and it’s just a matter of time before they clinch a spot in the Stanley Cup Playoffs. Hartman wants to be a part of the team long-term, and he solidified that Thursday by signing a three-year extension, worth a team-friendly $5.1 million.

The Chicago native and 2013 first round pick of the Blackhawks has found a home in Minnesota. He said Friday it’s the longest deal he’s had since signing his entry-level contract.

"It was an exciting day for me and my family. I like the camaraderie of this team, this locker room, the direction this team is heading. A lot of upside, and I think we’re just getting started," Hartman said.

Hartman spent his first four seasons with the Blackhawks before heading to the Nashville Predators in 2017. He played 64 games with the Predators before going to the Philadephia Flyers in 2018.

Hartman signed with the Wild in 2019, collecting 20 points, including nine goals, in 69 games. This season, he’s played in 40 of 45 games. He’s scored six goals and has 12 assists for 18 points. Guerin has liked what he’s seen out of the 26-year-old in his seventh NHL season. Guerin said Friday Hartman’s agent reached out a few months ago, and the extension got done.

"We really like Ryan. He wants to be here, he wants to be part of building something special here and we love that about him. He’s just a good guy, an honest, hard-working, tough kid," Guerin said. "He drives the same F-150 that he bought with his signing bonus. He’s a simple guy and I like everything about the kid."

"For a coaching staff, we’re just happy that we have somebody that’s going to be here for three years and somebody that plays with that bite, that edge, that grit. Plays Minnesota Wild style hockey, he’ll be around for a while now," Evason said.

In 354 career games, Hartman has 57 goals and 70 assists. At the age of 26, Guerin said he thinks Hartman is just scratching the surface of his potential.

Hartman kept his reasoning for staying in Minnesota simple: He wants to win. The Wild is currently 29-13-3, they’ve won five straight and are firmly in playoff contention.

"All I really want to do in this league is win. That’s everyone’s goal. To be honest, money doesn’t really matter. It’s winning," Hartman said. "You can make as much money as you want in your career and if you don’t have anything to show for it, what’s the point really? I saw where this team is heading, I know what this group has and how special it is. We’re very confident here, and that was a big reasoning of staying around."

The Wild has 11 regular season games to play, and they’re five points behind Colorado for the No. 2 spot in the Honda West. They’re 16 points clear of Arizona, which currently has the final playoff spot in the division. But if you think they’re getting complacent, think again.

Guerin and Evason put any thought of resting players or changing their approach before the playoffs to bed.

"It’s one of those things where we want to be playing our best hockey going into the playoffs. If we think this is a time to take our foot off the gas pedal and be complacent and not be diligent in our game and what we’re doing, then we’re making a big mistake. I don’t see that happening," Guerin said.

It didn’t take long for Kirill Kaprizov to make his presence known in his first NHL season. He scored a game-winning goal in overtime in his first game. He’s one of four players to have played in all 45 games this season, and made history in Wednesday night’s 4-1 win at Arizona.

Kaprizov scored his 19th goal, passing the franchise record for rookies previously set by Marian Gaborik. Two nights earlier, he scored to break Gaborik’s record for points in a rookie season with 37.

The Wild is at the L.A. Kings Friday night, and the San Jose Sharks Saturday night.