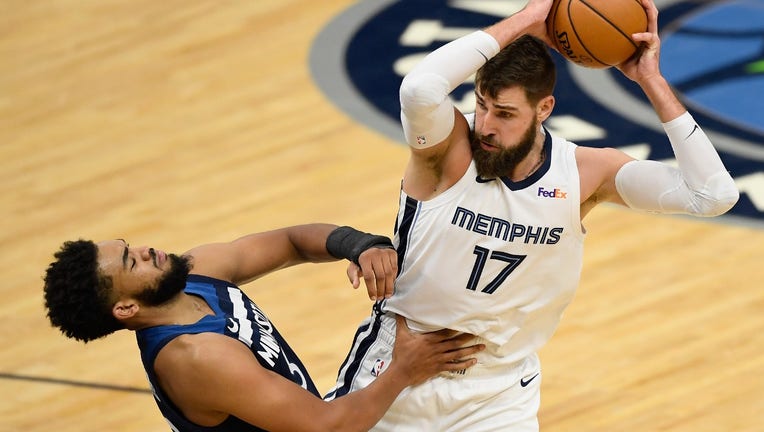 Karl-Anthony Towns #32 of the Minnesota Timberwolves defends against Jonas Valanciunas #17 of the Memphis Grizzlies during the third quarter of the game at Target Center on January 13, 2021 in Minneapolis, Minnesota. The Grizzlies defeated the Timber ((Photo by Hannah Foslien/Getty Images))

MINNEAPOLIS - Minnesota Timberwolves coach Ryan Saunders is trying to preach patience with a young roster still trying to mesh and find its identity, while also having a sense of urgency trying to stay relevant in the Western Conference in a 72-game season shortened due to the COVID-19 pandemic.

A combination of frustrations came together Wednesday night in the Wolves’ 118-107 loss to the Memphis Grizzlies at Target Center. The Timberwolves led 90-80 after three quarters, then promptly got out-scored 38-17 over the final 12 minutes despite the Grizzlies being without their two best players.

The Wolves fell to 3-8, and have lost seven on their last eight games after a 2-0 start.

"It’s never easy losing games, especially when you feel you played well enough to win for a majority of the basketball game. You talk of patience, but you also need to talk of urgency too," Saunders said Thursday morning. "We need to have a sense of urgency. The fourth quarter, everything is amplified."

The Wolves lost seven straight games when Karl-Anthony Towns went down with a left wrist injury. During that time, Josh Okogie went out with a bad hamstring. Both were back Wednesday night. Towns finished with 25 points, 14 rebounds, three assists and two blocks. D’Angelo Russell had 25 points and eight assists, and Malik Beasley had 28 points, six rebounds and five assists.

The trio combined for 78 of Minnesota’s 107 points, but offense wasn’t the issue. The Wolves committed 13 turnovers, which Memphis turned into 15 points and 16 extra shots. The Grizzlies shot 47 percent for the game, and the Timberwolves defense collapsed in the fourth quarter when they needed it the most.

Memphis scored 80 points in the paint Wednesday night, the most in an NBA game this season. The Grizzlies also out-scored the Wolves 50-21 in bench points.

While disturbing, it’s nothing new.

"It's very frustrating to say the least. I'm more disappointed with our discipline than our effort. We've got to do better than that in the fourth quarter. We can't have three quarters and be up by 10 and be 'Cool, like that's now how this NBA works,’" Towns said. "But it's the NBA, no boys allowed, so we've got to be grown men and be ready for the next one."

The Wolves get another crack at the Grizzlies Friday night, but time and patience are running thin. The Wolves are last in the Western Conference 11 games into the season.