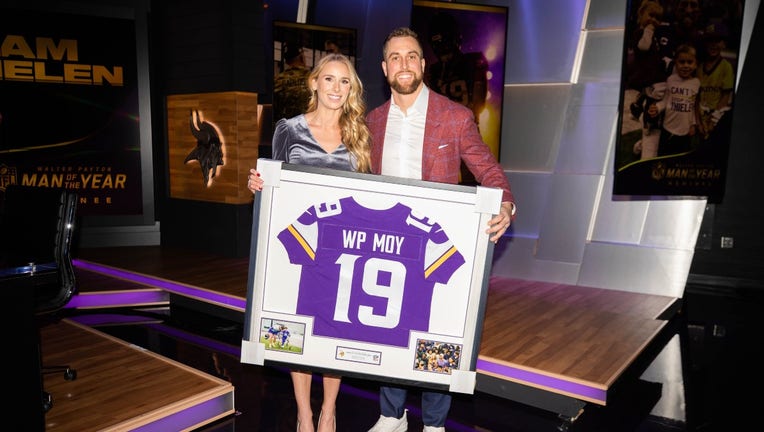 MINNEAPOLIS - The Minnesota Vikings and the NFL announced Tuesday morning that wide receiver Adam Thielen is the team’s 2022 nominee for the Walter Payton Man of the Year.

Considered one of the NFL’s most prestigious honors, the award goes annually to a player who not only shows excellence on the field, but who has a passion to impact lives beyond football and give back to their communities. Every NFL team has a nominee, and the winner will be announced during the NFL Honors Show on the Thursday before the Super Bowl.

Vikings wide receiver Adam Thielen is the team's 2022 nominee for the Walter Payton NFL Man of the Year Award.

Thielen and his wife, Caitlin, started the Thielen Foundation in 2018. Their biggest passion has been to give back to local youth through programs that serve, educate and inspire those in need so they are equipped and empowered to reach their full potential. The Thielen Foundation has donated more than $2.5 million to Twin Cities communities, and in October, the foundation donated $1 million to be shared between eight Minnesota non-profit groups.

"Adam and Caitlin’s commitment and willingness to give back and serve Minnesotans through the Thielen Foundation is truly inspiring," said Vikings Owner/President Mark Wilf in a statement. "We are proud of Adam for the impact he has made on the community and he is the best representation of what the Minnesota Vikings should stand for. We cannot thank him enough for his commitment to the organization, to the Twin Cities and to the entire state of Minnesota. He’s extremely deserving to be our 2022 nominee for this impressive honor."

"It’s such an honor especially when you’re voted on by your peers and teammates," Thielen said in a statement. "It’s just so cool to have them vote me for this award and not only me but also my wife, our foundation and what we’re trying to do. The greatest thing about it is the guys who are voting for it, are also the guys who are helping me out at a lot of these events to raise money to help this community as much as we possibly can. It makes it that much more special when your teammates are nominating you for the award and I am so thankful to be named the Vikings 2022 Walter Payton Man of the Year."

In 2020, the Thielen Foundation provided funds for a weight room renovation at Brooklyn Center High School, valued at $50,000. They also helped raise $250,000 to repair the lights at the stadium to allow for night games. The foundation also gave $25,000 to Robbinsdale Cooper High School for athletic renovations and new jerseys.

Thielen’s football story on the field is one that should allow for current youth football players to never give up on their dreams. He was a multi-sport athlete at Detroit Lakes before going onto play at Minnesota State-University Mankato. He entered the NFL in 2013 as an undrafted college free agent, and earned his way on the Vikings’ 53-man roster.

In the Viking’s Thanksgiving win over the Patriots, Thielen caught his 52nd career touchdown.

As a nominee, Thielen will wear a Walter Payton NFL Man of the Year helmet decal through the end of the season in recognition of his accomplishments on and off the field.  All 32 nominees will receive a $40,000 donation in their name to their charity of choice. The winner of the Walter Payton NFL Man of the Year award will receive a $250,000 donation to the charity of his choice.