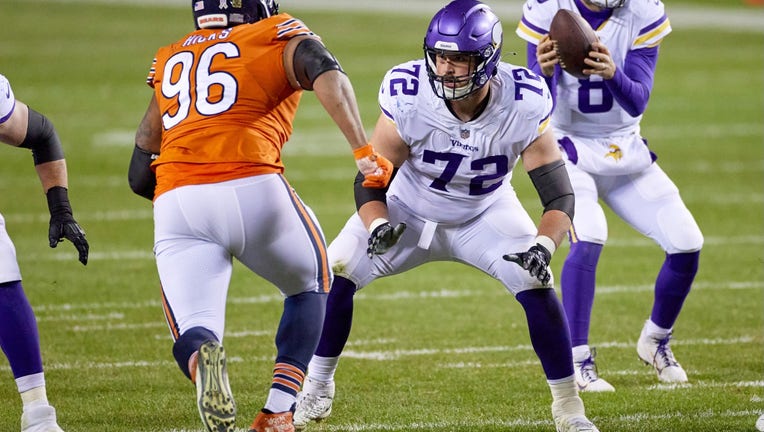 MINNEAPOLIS - The Minnesota Vikings could get back to .500 this Sunday for the first time all season with a win over the 2-7 Dallas Cowboys, but they’ll be without one key offensive lineman.

Ezra Cleveland has been ruled out for Sunday’s game. He did not practice all week due to an ankle injury suffered in the Vikings’ 19-13 win over the Chicago Bears at Soldier Field on Monday Night Football. Gary Kubiak said earlier this week Cleveland, a second round pick out of Boise State, injured his ankle on the first offensive series and played through it the rest of the game.

Cleveland had started the last for games, with Pat Elflein on injured reserve before being waived and claimed by the New York Jets.

With Cleveland out, Brett Jones will get the start on Sunday. He was released earlier this season, and had been on the practice squad before being elevated this week.

Jones is in his third season with the Vikings and has played in 10 games the last two seasons, primarily on special teams. He started three games on the offensive line in 2018.

“Brett is ready to go. He’s been ready to go every game since he got into this league. He’s one of the smartest players I’ve ever been around. Brett is going to do an awesome job, and we all know that,” center Garrett Bradbury said.

The luxury for Minnesota is Dallas features the second-worst rushing defense in the NFL, allowing five yards per carry. Dalvin Cook leads the NFL in rushing at 954 yards, is averaging nearly 5.5 yards per carry and leads the league with 12 rushing touchdowns.

The Vikings listed tight end Irv Smith Jr. (groin) and Cameron Dantzler (concussion) both as questionable for Sunday’s game after being limited in practice this week. Neither played Monday night. Dantzler was a full participant in Friday's practice, a good sign he could play Sunday.

Fullback C.J. Ham also remains on the reserve/COVID-19 list, but Zimmer didn’t rule out that he could play Sunday. Ham would need to have multiple negative tests to be cleared to play.

With seven games to play in the regular season, the Vikings will be looking to win their fourth straight after a 1-5 start. They took advantage of their opportunity coming out of the bye week with three straight wins over NFC North Division opponents, and now have three straight at U.S. Bank Stadium.

Many thought the season was over after a lifeless performance in a 40-23 loss to the Atlanta Falcons. Now, there’s new life.

“Each week that you win, the next game becomes that much more important. We’ve fought like crazy the las three weeks to put ourselves back into a situation to be in this thing,” tight end Kyle Rudolph said. “It does us no good if we don’t come home this week and take care of business this week and get back to 5-5.”