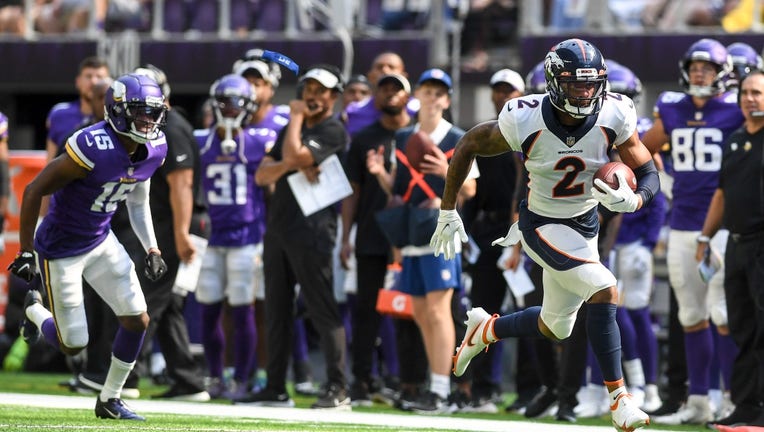 Pat Surtain II (2) of the Denver Broncos returns an interception for a touchdown against the Minnesota Vikings during the first half at U.S. Bank Stadium on Saturday, August 14, 2021.  ((Photo by AAron Ontiveroz/MediaNews Group/The Denver Post via Getty Images))

MINNEAPOLIS - It's only the preseason, starters didn't play and the result ultimately doesn't matter. That's what the Minnesota Vikings and their fans are telling themselves after Saturday's 33-6 loss to the Denver Broncos at U.S. Bank Stadium.

Two things became very clear as the Vikings had fans back in the stadium for the first time since Dec. 29, 2019: Starters better not get hurt, and key players better not get hit by COVID-19. The Vikings chose not to play nearly every offensive and defensive starter against the Broncos, letting 31 players stand and watch rather than risk an injury in an exhibition game. The Vikings' back-ups started slow, and it never got better.

After the loss, Mike Zimmer called the effort of the players who did play a "really poor performance, just very disappointing."

"I thought we had two good days of work this last week with those guys so we were going to give these other guys some opportunities to see if they can make the club. Some of them proved us right, and some of them proved us wrong," Zimmer said. "A lot of these guys are back-up players and the things they showed today was definitely not good enough."

Jake Browning, competing for the No. 2 quarterback job behind Kirk Cousins, got the start and finished 5-of-10 passing for 31 yards and an interception that Patrick Surtain II ran back 30 yards for a touchdown. After the game, Browning called his effort "a lost opportunity" and said Surtain II was sitting on Ihmir Smith-Marsette's route. The throw was also behind Smith-Marsette, and needed to be towards the sideline.

"If he’s squatting, I need to move on from that. Even if I threw a perfect ball, I think he still makes the play on it just because he was squatting so hard on it," Browning said.

Drew Lock finished 5-of-7 passing for 151 yards and two touchdowns for the Broncos, hitting K.J. Hamler for an 80-yard score after Cameron Dantzler got beat in coverage. Teddy Bridgewater took over for Denver in the second quarter and finished 7-of-8 for 74 yards and a touchdown to Trinity Benson, one of two for Benson on the day.

"The kid that caught the long touchdown pass, we practiced against him for two days. You’d think those guys would know his speed and what he’s done," Zimmer said.

The mistakes for the Vikings started early, with Dakota Dozier being flagged for holding in the end zone, resulting in a safety. Surtain then got the pick-six off Browning just a few plays after Wyatt Davis entered the game on the offensive line for the Vikings, and got pushed back into Browning for a sack. The Vikings also had three penalties on the defensive line for off-sides on third down situations.

About the only offensive highlight for the Vikings on the day came from kicker Greg Joseph. He converted field goals from 34 and 25 yards out. A.J. Rose Jr. led the Vikings in rushing with 25 carries for 100 yards, with Dalvin Cook and Alexander Mattison sitting, and Kene Nwangwu getting knocked out of the game early with a knee injury. Zimmer said it is not considered serious.

The Vikings also lost linebacker Cameron Smith in the first half to a concussion. Saturday was Smith's first game back after missing all of last season after a positive COVID-19 test revealed he needed to have open-heart surgery.

Despite missing 10 days of training camp with COVID-19, Vikings' rookie quarterback Kellen Mond saw the field Saturday. He finished 6-of-16 passing for 53 yards. He also ran five times for 25 yards. The Vikings managed 235 total yards on offense, with a combined 84 yards passing from Browning and Mond.

Lock and Bridgewater combined for 225 yards, three touchdowns and no turnovers against reserves on the Vikings' defense.

The loudest cheers from Vikings fans Saturday came when Olympic gold medalist Gable Steveson started the pregame "Skol chant," and when Bridgewater entered the game in the second quarter. Zimmer joked after Thursday's practice that he would join fans at bars near U.S. Bank Stadium after the first preseason game. Zimmer probably needs a beverage or two after Saturday, even if the result doesn't matter.

Zimmer said the back-ups who played Saturday will scrimmage next week to determine who is ready for the second preseason game.

"They need it. It showed," Zimmer said.

The Vikings host the Indianapolis Colts next Saturday night, where starters are expected to play at least some.