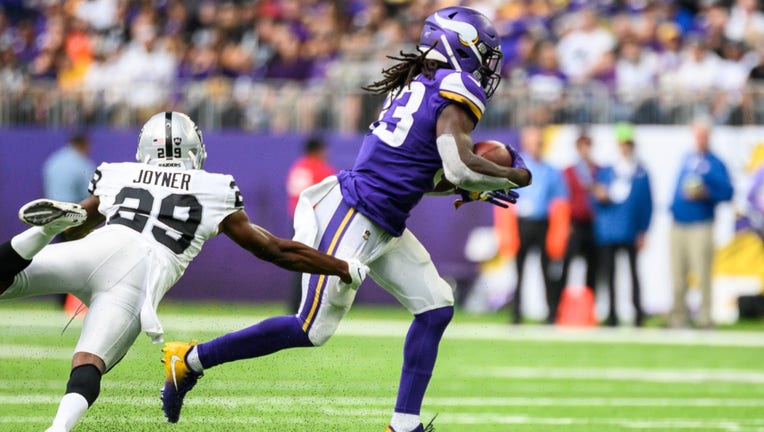 Dalvin Cook #33 of the Minnesota Vikings runs with the ball as defender Lamarcus Joyner #29 of the Oakland Raiders attempts to tackle him in the third quarter of the game at U.S. Bank Stadium on September 22, 2019 in Minneapolis. ((Photo by Stephen Maturen/Getty Images))

EAGAN - Dalvin Cook is only 18 games into his football career, and he’s already emerging as one of the best running backs in the NFL.

His talent was on full display midway through the third quarter of Sunday’s 34-14 win over the Oakland Raiders. On a 2nd-and-15 play, Cook made at least four defenders miss with cutbacks and plowed his way to near the first-down marker.

Cook finished the game with 143 total yards. He had 16 carries for 110 yards and a touchdown, and was the Vikings’ leading receiver with four catches for 33 yards. He became the first Viking in franchise history to start a season with three straight 100-yard rushing games.

Mike Zimmer has made it clear he wants to run the football, and Cook is the centerpiece. In a league that’s largely committed to passing downfield, Zimmer is sticking to the run to get into the end zone.

The Vikings scored 34 points in that win, with three of the four touchdowns coming via the run.

What makes Cook’s season that much more impressive through three games? He’s coming of playing just 15 games his first two seasons due to knee and hamstring injuries.

Cook’s 2019 start has included three straight games with at least 110 yards rushing and a touchdown. Four other players have done that in NFL history, and they’re all in the Pro Football Hall of Fame: Jim Brown, Curtis Martin, O.J. Simpson and Emmitt Smith.

“Maybe the most impressive thing with him is toughness in the tackles. He doesn't ever want to go down, but he's a physical runner with great speed and home run ability,” Zimmer said.

Cook says he feels great, he’s fully healthy and attributes his success to his teammates.

“That makes me want to work and leave it all on the line for those guys because they stood behind me through my ups and downs. Going through adversity is part of this game but I credit my teammates for being there for me,” Cook said.

Committing to running the ball is why Zimmer brought in Gary Kubiak in the offseason. The Vikings were 30th in the NFL in rushing last season, and struggled to get a push at the line of scrimmage.

With a new scheme and the offensive line winning in the trenches, running backs aren’t getting touched until they’re already five or six yards down field. If it can be done every week on a consistent basis, it can take the Vikings’ offense to an entirely different level.

And it’s not just Cook. Alexander Mattison had 12 carries for 58 yards and a hurdling touchdown over the Oakland defense Sunday. Adam Thielen was used for a short-yardage touchdown, and even Mike Boone ripped off a 24-yard run.

“The guys up front did an amazing job of getting out there and being physical. They came off the ball fast and were physical and establishing that run game we want to establish,” Mattison said.

The commitment to the run game should open up things for Kirk Cousins to get the ball down field as well. He completed just eight passes in the Week 1 win over Atlanta, and his opening 35-yard touchdown to Thielen Sunday worked as the result of being able to run the ball.

Cousins took more shots down the field, knowing Cook is in the back pocket for a big play at any moment.

“It takes 11, as cliché as that sounds. We try to focus on how 11 guys help the run game, and then our coaches do a good job of putting us in a position to run it effectively,” Cousins said. “I know Coach Zimmer, I think that's an important piece for him, too, is to see an offense that's running the football well. Really three weeks in a row we've done that.”

They’ll get tested Sunday at Chicago. The Bears’ defense is fifth in the NFL, allowing just 68.5 rushing yards per game. Cook had a combined 20 carries for 51 yards in two losses to Chicago last season.

“We're going against a really good football team next weekend who's well known for stopping the run, so that will be a big challenge,” Cousins said.