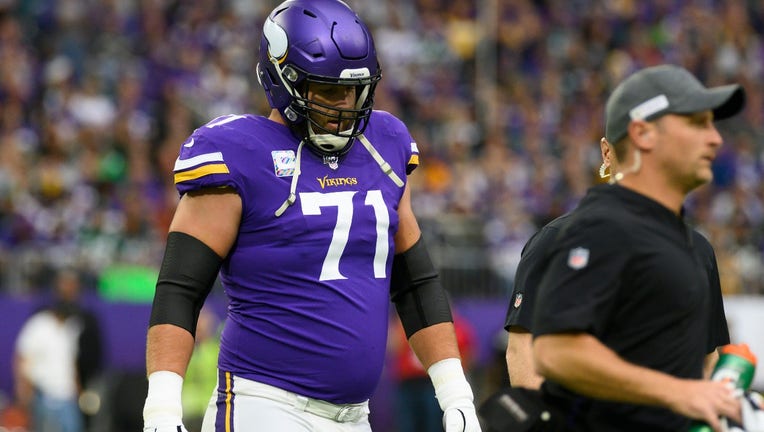 Riley Reiff #71 of the Minnesota Vikings walks off the field after sustaining an injury in the first quarter of the game against the Philadelphia Eagles at U.S. Bank Stadium on October 13, 2019 in Minneapolis, Minnesota. ((Photo by Stephen Maturen/Getty Images))

MINNEAPOLIS - The Minnesota Vikings made a big move to get under their salary cap on Wednesday, announcing they’ve released veteran offensive lineman Riley Reiff.

Reiff spent four seasons with the Vikings at left tackle, signing with Minnesota in free agency before the 2017 season after spending his first five seasons with the Detroit Lions. The move to release Reiff clears about $11.75 million in salary cap space, but it also leaves a massive hole to fill on the offensive line with free agency one week away.

Reiff was asked to restructure his contract last season, and started Minnesota’s first 15 games before missing the regular season final after being placed on the COVID-19 list. The Vikings gave him a $1 million bonus he missed for snaps in a season, that he would’ve reached if he didn’t miss the final game.

With his release, Ezra Cleveland becomes the favorite to take over at left tackle for the 2021 season. It also makes Brian O’Neill the most veteran player on the Vikings’ offensive line.