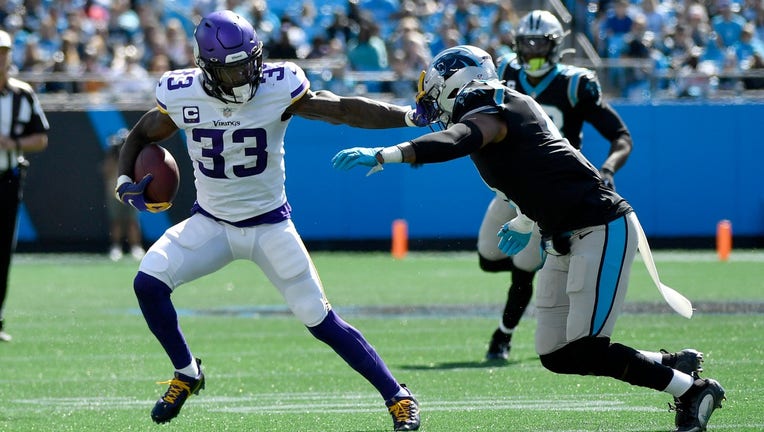 Dalvin Cook #33 of the Minnesota Vikings stiff arms Jermaine Carter Jr. #4 of the Carolina Panthers during the first half at Bank of America Stadium on October 17, 2021 in Charlotte, North Carolina.  ((Photo by Mike Comer/Getty Images))

MINNEAPOLIS - It’s the bye week for the Minnesota Vikings, but running back Dalvin Cook broke some of his own news Tuesday morning on the "All Things Covered" podcast with Patrick Peterson.

Cook is switching jersey numbers, starting in the 2022 season. Say goodbye to No. 33, and welcome back to No. 4. Cook wore the No. 4 as a star running back in college at Florida State.

Wearing No. 33 with the Vikings, Cook finished second in the NFL in rushing last season with more than 1,500 yards and 16 touchdowns. So far this year, he has 80 carries for 366 yards and two touchdowns. In Sunday’s overtime win at Carolina, Cook had 29 carries for 140 yards and a score.

In his final season at Florida State wearing the No. 4, Cook ran for 1,765 rushing yards, had 488 receiving yards and 20 total touchdowns. He was named the Orange Bowl MVP, and a unanimous All-American as well as First Team All-ACC.

Cook had 27 career rushing touchdowns with the Seminoles, and 13 career 100-yard rushing games.