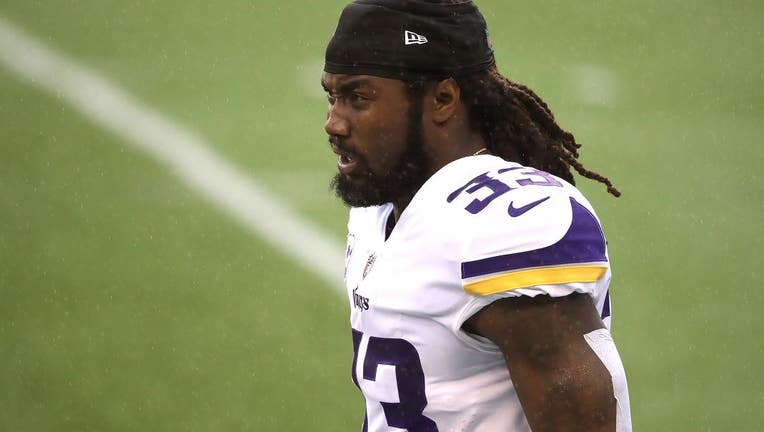 Dalvin cook will not play Sunday after suffering a groin injury against the Seahawks last Sunday. (Getty Images)

MINNEAPOLIS - Despite finishing second in the NFL in rushing and leading the league in all-purpose yards, Minnesota Vikings running back Dalvin Cook did not earn an All-Pro selection in 2020.

Not only did he not get picked to the first or second team, he didn’t even get a single vote. After learning of the news last weekend, Cook went to Instagram to voice both his frustration and his motivation for the 2021 season.

"Wasn’t going to speak on it but just know blame the NFL or whoever printed that All-Pro list for what’s bout to happen this year! #LAA #LongLivePops," Cook posted to Instagram.

The two All-Pro selections for running back went to Derrick Henry and Alvin Kamara. Henry led the NFL in rushing with 2,207 yards and 17 touchdowns. Kamara ran for 932 yards, caught 83 passes for 756 yards (1,688 total yards) and 21 total touchdowns. That includes a six touchdown game against the Vikings in a 52-33 loss that eliminated Minnesota from the NFC Playoffs.

Cook finished second in the NFL in rushing at 1,557 yards and 16 touchdowns on 312 carries. He added 361 receiving yards, the second-most in his career, and one receiving touchdown. Cook missed two regular season games, sitting out the loss to the Falcons before the bye week to nurse a groin injury. He also missed the regular season finale at Detroit after the sudden and unexpected death of his father.

The Vikings did have one player named Second Team All-Pro. Wide receiver Justin Jefferson, also named to the Pro Bowl as a rookie, earned the honor after leading NFL rookies with 1,400 receiving yards. He also scored seven touchdowns, and set a Super Bowl-era record with 88 catches in his first season. His marks for receptions and yards each passed Randy Moss’s records as a rookie in 1998.

Cook joined Jefferson as a Pro Bowl pick and it’s a safe bet he’ll have extra motivation going into the 2021 season.