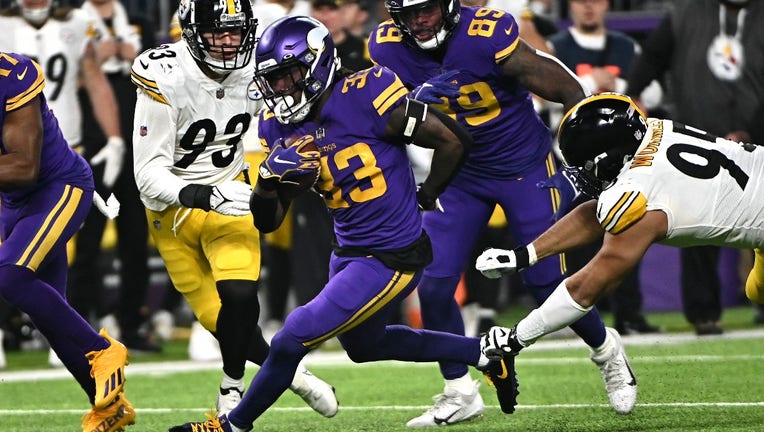 Dalvin Cook #33 of the Minnesota Vikings carries the ball for a touchdown in the second quarter of the game against the Pittsburgh Steelers at U.S. Bank Stadium on December 09, 2021 in Minneapolis, Minnesota.  ((Photo by Stephen Maturen/Getty Images))

MINNEAPOLIS - After helping lead the Minnesota Vikings to a 36-28 win over the Pittsburgh Steelers on Thursday Night Football, running back Dalvin Cook was named the FedEx Ground NFL Player of the Week.

Cook had 27 carries for a season-high 205 yards and two touchdowns in the win. He averaged 7.6 yards per carry, and both scores came in the first half as the Vikings built a 29-0 lead before the Steelers started their comeback.

Cook’s big night came just 11 days removed from a significant left shoulder injury in a loss at the 49ers where he had to be carted off the field. He missed the next game at the Lions.

By winning the award, FedEx will make a $2,000 donation in Cook’s name to a Historically Black College or University.

For the season, Cook has 978 rushing yards and six rushing touchdowns in 10 games.