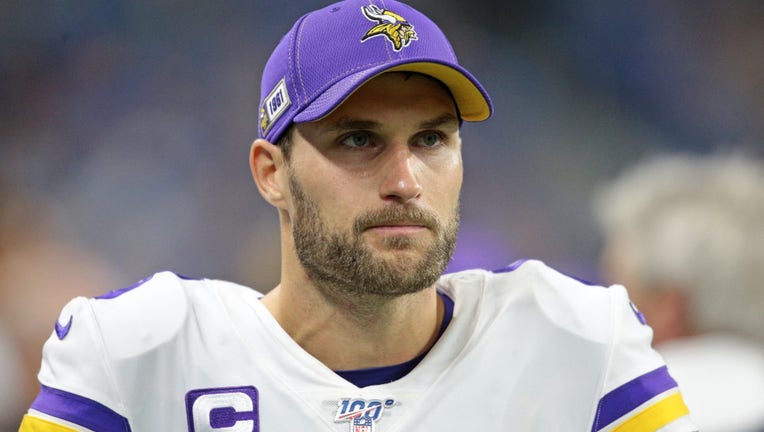 Minnesota Vikings quarterback Kirk Cousins (8) is seenduring the second half of an NFL football game against the Detroit Lions in Detroit, Michigan USA, on Sunday, October 20, 2019  ((Photo by Jorge Lemus/NurPhoto via Getty Images))

MINNEAPOLIS - The Minnesota Vikings have one of the lowest COVID-19 vaccination rates in the NFL among players, and it has the front office and head coach Mike Zimmer frustrated with the regular season starting in about three weeks.

It’s enough of an issue that the team brought in Dr. Michael Osterholm, an epidemiologist and Director of the Center for Infectious Disease Research and Policy at the University of Minnesota, to talk to the team earlier this week about the COVID-19 vaccine and answer any questions players might have. A Washington Post report released during training camp showed the Vikings had 70 percent of players going through the vaccination process, with 64.5 percent fully-vaccinated.

After missing several practice sessions, Vikings quarterback Kirk Cousins was back to training camp but he wasn't interested in talking about whether or not he's been vaccinated for COVID-19.

That means that on a 90-player roster, as many as 27 players are not vaccinated. The NFL has strict protocols in place for players who are not vaccinated when it comes to team meetings and travel. Vaccinated players can essentially go about their daily basis as if it were before the pandemic.

Quarterback Kirk Cousins had to miss five days of camp after being a close contact to Kellen Mond, who tested positive for COVID-19.

Cousins spoke with reporters Wednesday ahead of the Vikings’ preseason game at Kansas City Friday, and was asked about the meeting with Osterholm.

"It was a great meeting, it was informative. And it was what it was," Cousins said.

After returning from the COVID-19 list, Cousins called his vaccination status "a private health matter." He’s following NFL protocols that are in place for players who have not been vaccinated. Players have been consistent throughout training camp, saying the vaccine is a personal choice for everyone and they'll treat each other with respect, it won't divide the locker room. But will that change if a player gets COVID-19 during the season, or if they have to take a loss because of an outbreak?

Zimmer was asked Tuesday about the meeting and said it was great to have Osterholm there. He’s just not sure it will cause any players to change their minds and get the vaccine. He said he just wants the players and their families to healthy, safe and not get sick.

The Vikings and other NFL teams risking having to forfeit games or play without key players if they test positive for COVID-19 during the regular season.