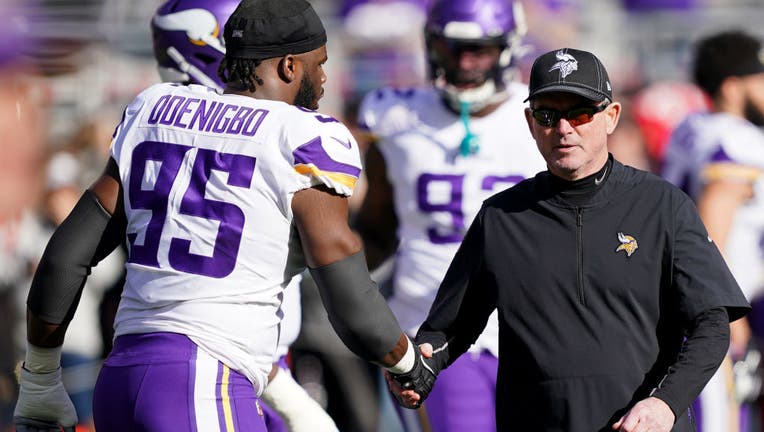 SANTA CLARA, CALIFORNIA - JANUARY 11: Head coach Mike Zimmer of the Minnesota Vikings shakes hands with Ifeadi Odenigbo #95 during warm ups prior to their game against the San Francisco 49ers during the NFC Divisional Round Playoff game at Levi's Sta

It means all three have either tested positive for COVID-19, or are in quarantine after coming in close contact with someone who has tested positive. That makes seven Vikings players that have been placed on the COVID-19 list since testing started when rookies arrived last week to go through health screening at TCO Performance Center for Training Camp.

On Monday, top draft choice and wide receiver Justin Jefferson was among four players placed on the COVID-19 list. The others are Brian Cole II, Tyler Higby and Blake Brandel. The Vikings also announced on Monday that head trainer and Infection Control Officer Eric Sugarman and his family tested positive for COVID-19 last weekend.

On Tuesday, defensive tackle Michael Pierce, the team's biggest free agent signing, announced he is opting out of the 2020 season due to COVID-19 concerns. Pierce cited concerns with asthma.

Vikings' veterans reported to Training Camp on Tuesday for testing and health screening. Their first on-field action should take place early next week.