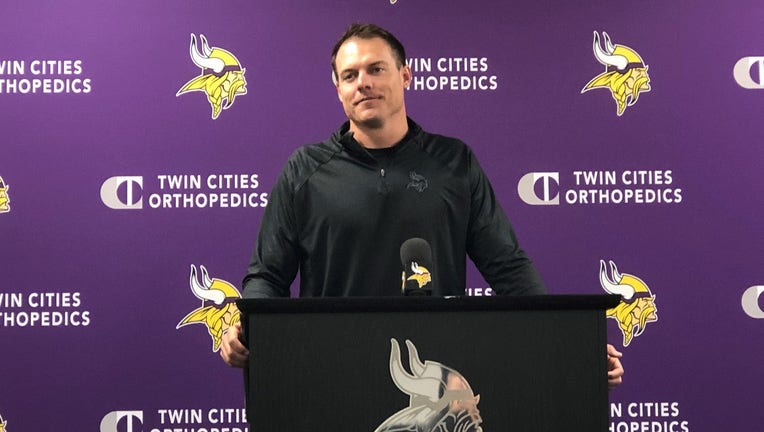 Kevin O'Connell and the Minnesota Vikings hold their first practice of 2022 training camp on Wednesday at TCO Performance Center.

MINNEAPOLIS - Kevin O’Connell says he started to get antsy about his first training camp as an NFL head coach around the Fourth of July. Kwesi Adofo-Mensah got a text from defensive tackle Harrison Phillips during the summer off, itching to put football pads on.

The Minnesota Vikings will take the field on Wednesday for their first training camp practice at TCO Performance Center. Their first session open to fans is on Saturday, and they’ll workout at U.S. Bank Stadium on Friday.

The Minnesota Vikings hold their first training camp practice on Wednesday with Kevin O'Connell as head coach and Kwesi Adofo-Mensah in charge of the front office.

"I could not be more excited for Day 1 of training camp. Right about that time you start to feel relaxed, Fourth of July hits, I was ready to get back to work right then and there," O’Connell said Tuesday. "Just from my excitement of being around these guys. I’ve clicked into gear and I’m ready to roll."

It’s a new era for the Vikings, replacing Mike Zimmer with O’Connell and Rick Spielman with Adofo-Mensah. There’s a positive energy in the building, and the hope is that translates to wins on Sundays and returning to the NFC Playoffs for the first time in three seasons.

"There’s a lot of guys who were on a personal mission this summer. A lot of guys who really bought into what we were talking about, the goals we set for them and we’re really excited to get out there and see what they look like on the field," Adofo-Mensah said.

Vikings’ rookies and select veterans, 31 in total, reported to TCO Performance Center on Sunday. The rest were in the building on Tuesday. The only players who won’t be practicing Wednesday -- Blake Proehl and Ryan Connelly, who will start on the physically unable to perform list.

Veterans Harrison Smith and Dalvin Cook talked Wednesday about a fresh, positive energy at the team’s facility, led by O’Connell.

"You just listen to him speak, listen to him interact with guys, anybody around the building, he’s a very positive guy. He’s very confident in what he’s doing, and what we’re doing. So it’s pretty easy to buy into that," Smith said.

Organized team activities and minicamp were largely mental tests for the Vikings between on-field walk-throughs, film study and team and positional meetings. They’re installing a new offense and defense, and O’Connell says training camp is the next phase. More competition, they get in pads and see what a roster largely intact from last season looks like with new coaches.

The Vikings will have 11 practices in pads during training camp, five below the maximum allowed by the NFL's collective bargaining agreement. They're emphasizing quality over quantity.

"When we’re going, we’ve gotta go. When we put those pads on, it’s just not that many opportunities. To prepare your team, there’s no other way than to go full, compete, good on good," O'Connell said.

Chemistry and culture were the top priorities of the offseason program. The players appear to have bought in.

"That’s what we’re building, why culture matters. Why does it matter? Because when things get hard, that’s what you’re going to rely on," O’Connell said. "Rely on the guy next to you, hopefully our team feels that way about me leading the charge this year."

The goal is ultimately to win games and go after championships, and the process in trying to build a roster that can get there starts at training camp.

"Fans should be excited about what they’re going to see. We’ve got a lot of players who are excited to be here, we’ve got a positive environment. It’s going to be fun, that’s all I can say," Adofo-Mensah said.

Irv Smith Jr. was on the verge of a break-out third NFL season with the Vikings before tearing his meniscus during the 2021 preseason. He missed all of last season after making 66 catches for 676 yards and seven touchdowns in his first two seasons.

Smith did mostly individual work during OTAs and minicamp, but the starting tight end will be full-go for practice starting Wednesday. He was one of the 31 players to report early, and worked out for O’Connell on Monday.

"Just have to give Irv a ton of credit. Talk about a guy that put in some work. To see him moving around yesterday, you can tell the work has been put in. We’re expecting him to be full to start," O’Connell said.

Adofo-Mensah on Tuesday took the time to clarify some comments made in a recent USA Today story, where he said, "You never want to go full Rams," the team that went all-in last season in a trade to get Matthew Stafford, then won the Super Bowl.

"That was probably not the best turn of phrase I think in my evolution. I have a great deal of respect for the Rams and what they’ve done. To be able to put all your chips in at the poker table is a lot of times not wise. You want to be able to do it 2, 3, 4 times so that you can win one or two (Super Bowls). That’s ultimately what I meant," Adofo-Mensah said.

He also said in the piece, "The one asset where you get nervous about not burning it down is quarterback."

Adofo-Mensah’s biggest decision of the offseason was whether to keep Kirk Cousins in Minnesota, or go in another direction and seek a trade partner. He said Tuesday that wasn’t in reference to keeping Cousins, who signed a one-year extension and is making $40 million this season.

"Kirk knows how I feel about him. We’re in a great place, I love his mindset coming into camp and that’s where we’re at," Adofo-Mensah said.